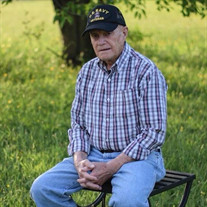 Glenn W. “Glennie” Ketterman, Jr., age 85 years, a resident of Elkins, passed away Monday, April 16, 2018 in the Davis Medical Center. He was born May 29, 1932 at Elkins, a son of the late Glenn W. Ketterman, Sr. and Jessie Shreve Ketterman. On October 2, 1959 at Oakland, MD, he was married to Falene “Faye” Ryan Ketterman who survives. Also surviving is one son, James Randall Ketterman of Troy, VA, daughters, Terri Dumire of Elkins and Chrissie Ketterman of St. Albans, WV; one sister, Patricia “Pat” Nestor of Elkins, four grandchildren, Ryan, Clayton, Riley and Carter and one great grandchild, Annabelle. Also preceding him in death were two brothers, Randall and James F., and five sisters, Ruth, Mary, Joanne, Glennadine and Jean Ellen. Glennie was a Veteran of the United States Navy having obtained the rank of Seaman First Class serving during the Korean War. He was employed by the West Virginia Department of Highways at the time of his retirement. He was a member of the Orlena United Methodist Church, a woodworker and a craftsman. He was an avid turkey hunter with his passing taking place on the first day of Spring Gobbler Season. At Glennie’s request, his remains were cremated. A memorial service will be held at 2:00 pm Saturday, April 21, 2018 at the Orlena United Methodist Church at Gilman. Pastor Randy Mitchell and Rev. David Fisher will officiate. Full Military Honors will be accorded following the memorial service by members of the United States Navy, H.W. Daniels Post 29 American Legion and Tygart Valley Post 3647 Veterans of Foreign Wars. Memorial contributions may be made to the American Heart Association, Ohio Valley Affiliate, West Virginia Region, PO Box 12110, Charleston, WV 25302 or the Orlena United Methodist Church, Old Route 219, Elkins, WV 26241 in memory of Glennie. The Tomblyn Funeral Home of Elkins is in charge of the arrangements for Glenn W. “Glennie” Ketterman, Jr. Condolences may be expressed to the family at www.tomblynfuneralhome.com.

The family of Glenn W. Ketterman Jr. created this Life Tributes page to make it easy to share your memories.