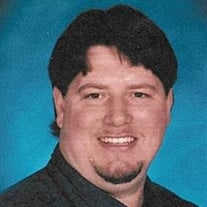 Gregory Michael “Greg” Streets, a resident of Elkins, passed away Tuesday, November 26, 2019 at Ruby Memorial Hospital in Morgantown at the age of 51. He was born August 6, 1968 at Washington, DC a son of the late Richard Lee Streets and Wahneta Walker Streets who survives in Elkins. On May 18, 2001 in Elkins he was married to Melissa Dawn Fisher Streets who survives in Elkins. Also surviving is one brother, Brian Streets and wife Michelle; a sister, Mikki Summerfield; three nephews, Timothy Summerfield, Asa Streets and Grayson Streets; two great nieces, Scarlett Moon Summerfield and Harper Rhain Summerfield; his devoted mother-in-law, Theresa A. Fisher, all of Elkins and a brother-in-law, Matthew L. Fisher of Charleston, WV. Greg attended the schools of Randolph County, West Virginia University and Fairmont State College. He was employed by Walmart as Manager of the Meat Department at the time of his retirement. He enjoyed hunting, fishing, photography, traveling, gardening, joking with others and hanging out with friends. He enjoyed time with his family especially with his nephews. Friends may call from 6:00 pm until 8:00 pm Monday, December 2, 2019 at the Tomblyn Funeral Home in Elkins. A funeral service will be held at 1:00 pm Tuesday, December 3, 2019 from the funeral home chapel. Pastor Jim Murphy and Pastor Julie Davis will officiate and interment will follow in the Beverly Cemetery. Memorial contributions may be made to St. Jude’s Children’s Research Hospital, 501 St. Jude Place, Memphis, TN 38105 or the Children’s Miracle Network, West Virginia University Children’s Hospital, 1 Medical Center Drive, Morgantown, WV 26506 in memory of Greg. The Tomblyn Funeral Home of Elkins is in charge of the arrangements for Gregory Michael “Greg” Streets. Condolences may be expressed to the family at www.tomblynfuneralhome.com.

Gregory Michael &#8220;Greg&#8221; Streets, a resident of Elkins, passed away Tuesday, November 26, 2019 at Ruby Memorial Hospital in Morgantown at the age of 51. He was born August 6, 1968 at Washington, DC a son of the late Richard Lee Streets... View Obituary & Service Information

The family of Gregory Michael "Greg" Streets created this Life Tributes page to make it easy to share your memories.