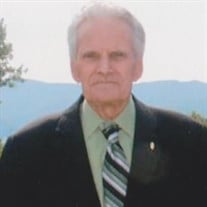 Mr. Harold Kenneth Gainer, Sr., age 85 years, a resident of Montrose, passed away Wednesday, November 2, 2016 in Valentines Personal Care Home in Elkins following an extended illness. He was born June 16, 1931 at Montrose, a son of the late Kenneth Charles Gainer and the late Elva Kittle Gainer. On August 4, 1952 at Montrose, he was married to Anna Mae Curtis Gainer who survives at Montrose. Also surviving are three sons, Harold K. Gainer, Jr. of Elkins, Joseph Charles Gainer of Montrose and Richard Wayne Gainer of Hampton, VA. One daughter, Phyllis Ann Gainer Varian of Dry Fork; two brothers, William Gainer, Lakeland, FL and Edward Gainer, Akron, OH; one sister, Barbara Ann Whetsell of Elkins; nine grandchildren and thirteen great grandchildren also survive. Also preceding him in death was an infant brother, Charles Gainer. Harold attended the schools of Randolph County. He was a twenty year Veteran of the United States Air Force retiring with the rank of Master Sergeant. Following his retirement, he was employed as a carpenter for O.J. Construction. He was a member of the Mercy Chapel United Methodist Church at Montrose and was active with The Gideon’s International since 1980. The family would like to thank the Staff of Valentine’s Personal Care Home for the wonderful care shown to Harold during his time at the facility. Friends may call from 6:00 pm until 8:00 pm Saturday, November 5, 2016 at the Tomblyn Funeral Home in Elkins. A funeral service will be held at 2:00 pm Sunday, November 6th from the funeral home chapel with Pastor Randy Mitchell officiating. Interment will follow in the Leading Creek Primitive Baptist Cemetery at Montrose. Memorial contributions may be made to The Gideon’s International, PO Box 95, Montrose, WV 26283-0095 or the Mercy Chapel United Methodist Church, c/o Sharon Bedford, PO Box 53, Montrose, WV 26283 in memory of Mr. Gainer. The Tomblyn Funeral Home of Elkins is in charge of the arrangements for Mr. Harold Kenneth Gainer, Sr. Condolences may be expressed to the family at www.tomblynfuneralhome.com.

The family of Harold Kenneth Gainer Sr. created this Life Tributes page to make it easy to share your memories.