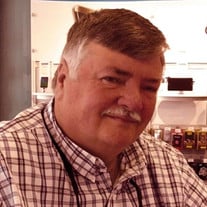 Reverend Harold Arthur Langevin Jr. overcame his illness and left this world to be with his Lord and Savior on Monday, September 2, 2019. He was born November 2, 1954 in Roanoke, Virginia to the late Harold A. Langevin Sr. and Barbara Kyle Langevin. On April 24, 1987 he married Donna Harker Langevin, formerly of Fairview, West Virginia. They celebrated 32 years of marriage this year in the spring gardens of Charlottesville, Virginia. Those that loved him and will cherish his memory include his wife Donna Langevin of Elkins; his son, Jonathan Langevin and wife Alicia of Elkins; his daughter Erin Golden and husband CJ of Beverly; his daughter Chelsea Langevin and fiancé Caleb of Beverly; his grandchildren Matthew and William Langevin and Jacob and Leland Golden; his brother Alan Langevin and wife Cathy of Elkins; his nephew Kyle Langevin of Elkins; his uncle George “Tyke” Kyle and wife Anna Marie of Elkins; his sister-in-law Paula O’Neil and husband Sonny of Seneca Rocks; his niece Brooke McKinney and husband Nathan of Morgantown; his nephew Wesley O’Neil and wife Missy of Morgantown; and his loving, best friends Bob and Peggy Lockhart of Elkins. In addition to his parents, Harold was preceded in death by his maternal grandparents Raymond and Owena Kyle; his paternal grandparents Joseph Frederic Harold and Grace Langevin; and one granddaughter Isabelle Madana Golden. Harold moved to the town of Elkins as a small child and attended the schools of Randolph County. A 1973 graduate of Elkins High School, he attended Fairmont State College and received his Bachelor of Arts in Music Education in 1977. While attending school, he nurtured his love of music by being a member of the school’s wind symphony, brass ensemble, stage band, marching band, symphonic choir, the Collegiate Touring Choir, and the West Virginia Highlander Bagpipe Band. He was also a leader of the Baptist Campus Ministry, the Christian Student Union, and the vice president of his Junior Class. After college, Harold returned to Randolph County as the band director at Tygart Valley High School until 1980. Afterward, he was employed in the credit department at Memorial General Hospital. In 1986, he began a 25-year career with the Department of Health and Human Resources, retiring as an economic service worker in 2011. He was also the choir director and Sunday School teacher at Woodford Memorial United Methodist Church, the director of choirs at Otterbein United Methodist Church, a coach for Little League Baseball and Mighty Mites Basketball, and an instructor of private trumpet and piano lessons. In 2006, he completed pastoral schooling and became a licensed United Methodist Pastor. He had several appointments in multiple districts and touched many lives in those communities through his sermons at Coffman Chapel, the Ellamore Charge, the Mill Creek Charge, the Brandonville Charge, the Fetterman Charge in Grafton, and the Belington Circuit, where he was stationed at the time of his illness. Harold was also very active in his community, having been a member of several organizations and boards, including being a Volunteer Chaplain at Davis Medical Center in Elkins and serving on their Ethics Committee, serving on the board of the Helping Hand Clearing House, being the Prayer Advocate for the West Virginia Conference of United Methodist Men, and being a member of the EHS Alumni Association. In 2018, he received the Torch Award from the General Committee of the United Methodist Men’s Office of Civic Youth-Serving Agencies/Scouting. He shared his love of music with his community as he was a member of several local ensembles including the Gloryland Band, the Barber Shop Quartet, and the Just For Fun Band, which he directed until 2018. Harold was proud of his pastoral and civic work in the communities in which he was stationed and devoted the majority of his days to serving those communities in any way that he could. He will be remembered for sharing his musical talent, his love of the band Chicago- which he has passed on to his children and grandchildren, his work ethic, his fantastically dry sense of humor, and his unyielding devotion to his faith. Friends may call from 5:00 pm until 8:00 pm Thursday, September 5, 2019 at the Tomblyn Funeral Home in Elkins. On Friday, September 6th he will be moved to the Otterbein United Methodist Church in Elkins where he was a member since 1987. A visitation will be held at the church from 10:00 am until 10:45 am with a funeral service to follow at 11:00 am. Pastor Julie Davis will officiate and interment will follow in the Mountain State Memorial Gardens near Gilman. Memorial contributions may be made to Otterbein United Methodist Church, 1100 S. Davis Ave., Elkins, WV in memory of Harold. The Tomblyn Funeral Home of Elkins is in charge of the arrangements for Reverend Harold Arthur Langevin, Jr. Condolences may be expressed to the family at www.tomblynfuneralhome.com. “His Lord said to him, ‘Well done, good and faithful servant; you have been faithful over a few things, I will make you ruler over many things. Enter into the joy of your Lord.’” Matthew 25:16-23

Reverend Harold Arthur Langevin Jr. overcame his illness and left this world to be with his Lord and Savior on Monday, September 2, 2019. He was born November 2, 1954 in Roanoke, Virginia to the late Harold A. Langevin Sr. and Barbara Kyle... View Obituary & Service Information

The family of Reverend Harold A. Langevin, Jr. created this Life Tributes page to make it easy to share your memories.