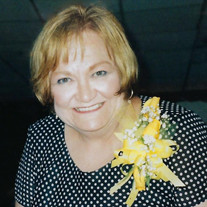 Harriet Jane Woods, age 75 years, a resident of Glenmore, departed this life, Friday, March 2nd, 2018 after an extended illness. She was born February 3, 1943 in Elkins and was a daughter of the late Walter “B” and Frances Kemp Woods. She is survived by one sister, Dorothy Carlson of Fairmont, WV; two nieces, Kari Coffindaffer and husband Mark Coffindaffer of Lost Creek, WV and Angelia Mackey and husband Dean Mackey of Houston, TX; great-niece Carissa Coffindaffer of Lost Creek, WV and two great-nephews, Christopher Nichols of Farmington, WV and Carl Mackey of Houston, TX. Also surviving are first cousins, Theresa Markel of Elkins, Randy Lang of San Francisco, CA, Dr. John Sutton of Martinsburg, WV and Carol Sutton Gija of Venice, FL. Robert Kemp of Washington D.C. and Rose Marie Kemp of Washington D.C. and her dear friend Carol Severt of Portland, Oregan, and Harriet’s longtime friend Gary Horvath of Wintergreen, VA. Also preceding her in death were her maternal grandparents, John and Harriet Durst Kemp, her paternal grandparents, Theresa Liggett Woods Sutton and Walter Flemming Woods; three aunts Carrie Kemp, Nettie English and Lucille Lang, two uncles Col. John Liggot Sutton and Clarence Kemp; two cousins John English and Franklin English and her nephew John Carlson and his longtime friend Sheree Nixon. Harriet attended the schools of Randolph County and was a graduate of Elkins High School Class of 1961 where she was a member of the Future Homemakers of America. She was also a member of the National Honor Society and the First United Methodist Church and was active in the Methodist youth fellowship, and had served as a Maid of Honor in the Mountain State Forest Festival in 1965. She was a graduate of Fairmont State College Class of 1965 with a degree in Elementary Education and received a Master Degree in Reading from West Virginia University in 1970. Harriet started her teaching career in 1967 at Paw Paw Elementary School. She then returned to Elkins, teaching at Central, North, and Jennings Randolph schools. She taught first and second grades for forty years, retiring in 2007. She was known for her altruistic nature and her sense of humor. Her main interests were her teaching, her parents, family members and friends. She was well-known for her love of children and her dedication to her students. She was a member of the First United Methodist Church, and Alpha Delta Kappa Sorority. She enjoyed watching movies, doing crafts and spending time with beloved cat “Prin”. Harriet’s request for cremation was honored. The family will receive friends from 11:00 am until 12:00 pm Thursday, March 8th, 2018 at the Tomblyn Funeral Home in Elkins. A memorial service will be held at 12:00 pm Thursday from the funeral home chapel with Pastor Josh Pennington officiating. The family suggests that memorial contributions be made to the Randolph County Humane Society, P. O. Box 785, Elkins, WV 26241 in memory of Harriet. The Tomblyn Funeral Home of Elkins is in charge of the arrangements for Harriet Jane Woods. Condolences may be expressed to the family at www.tomblynfuneralhome.com.

Harriet Jane Woods, age 75 years, a resident of Glenmore, departed this life, Friday, March 2nd, 2018 after an extended illness. She was born February 3, 1943 in Elkins and was a daughter of the late Walter &#8220;B&#8221; and Frances Kemp... View Obituary & Service Information

The family of Harriet Jane Woods created this Life Tributes page to make it easy to share your memories.