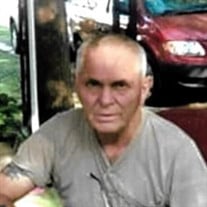 Mr. Harry Carl Jackson Hall, affectionately known as “Little Billy” to his family, formerly of Barrackville, died peacefully in his sleep at his home in Elkins on Friday, October 9Th. He was the last of eight brothers born to the late William Spencer and Olie May Estep Hall of Barrackville. He was 82 years old and had suffered a stroke in 2011 which left him paralyzed on his right side. Harry was a proud West Virginian to the end of his days; he loved his mountains of home. He instilled his pride of West Virginia into his children, telling them many stories of his growing up years in Barrackville. He joined the U.S. Army at Fairmont when he was but 16 years old, sworn in by his brother George, first in the National Guard and then active duty. All eight brothers served in the Army, he lost his brother Russell in the Korean War and his brother Clyde in Vietnam. Harry went on to serve in Korea himself, earning a black belt in karate. He attended and successfully graduated from Jungle Warfare School in Panama and was a designated marksman. He remained a staunch Patriot and strong Veteran advocate for the rest of his life, and all four of his children also served in the military. He worked as a cable technician at Time Warner for many years in Fairmont, and then as an electrician with Consolidated Coal until his retirement in 2004. He was married for 56 years to Carolyn Jean Frey Hall, of Grafton, who he met while they were both on active duty stationed in San Francisco. Carolyn was his chief caretaker after he suffered the stroke, faithfully taking care of him until the end. A special mention to Delores Fincham, who helped care for him at the end of his life with patience and love, and Judy Himes. These caring women helped make the end of his life dignified and loving. Harry and Carolyn were the parents of four children who survive him, Christie (Hall) Cratty and husband Lance, of Ames, Iowa; Patricia (Hall) Kmucha and husband Christopher, of Elkins; Karl Hall and wife Michelle, of Phenix City, Al; and Matthew Hall, of Dudley, North Carolina. He is survived by 14 grandchildren and 8 great-grandchildren. Harry was very social, made friends easily, and was a great storyteller. He was very funny, an extraordinarily intelligent man, he loved to read and was rarely without a book nearby. He was extremely outspoken and forthright with his opinion. Harry had a special affinity for dogs and had several special companions throughout his lifetime. He very much loved and cared for his grandchildren, teaching them many things. He had a great interest in history, enjoyed the outdoors and was a talented electrician and woodworker. He was always hardworking and always had a project going until the day he had the stroke. He was very loved and will be very much missed by his family and all who knew him. Friends may call from 1:00 pm until 3:00 pm Thursday, October 15, 2020 at the Tomblyn Funeral Home in Elkins, WV. Masks and social distancing will be required for anyone attending Mr. Hall’s visitation. All Veterans are encouraged to attend and Military Honors will be accorded at 3:00 pm Thursday at the funeral home chapel. Cremation will then take place. The family request that contributions be made to any Veterans Charity or to a charity of choice in memory of Mr. Hall. The Tomblyn Funeral Home, 45 Randolph Ave, Elkins, WV, 26241 is in charge of the arrangements for Harry Carl Jackson “Billy” Hall. Condolences may be expressed to the family at www.tomblynfuneralhome.com.

Mr. Harry Carl Jackson Hall, affectionately known as &#8220;Little Billy&#8221; to his family, formerly of Barrackville, died peacefully in his sleep at his home in Elkins on Friday, October 9Th. He was the last of eight brothers born to the... View Obituary & Service Information

The family of Harry Hall created this Life Tributes page to make it easy to share your memories.