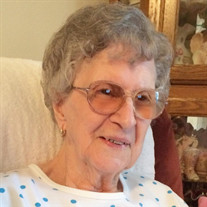 Hazel L. Shaffer, age 99 years, a resident of Leesburg, GA, passed away Wednesday, December 18, 2019 at Albany, GA. She was born July 10, 1920 at Valley Head, a daughter of the late John Everett and Eva Maude Orr Vandevender. On December 9, 1937 at Huttonsville, she was married to Ralph Forest Shaffer who preceded her in death June 3, 1974. She is survived by one daughter, Phyllis Swecker and husband Phil of Leesburg, GA; two grandsons Jeffrey Swecker and wife Marcy of South Beloit, IL and Mitchell Lynn Swecker of Leesburg, GA and one niece, Dolores Bennett, Crozet, VA. Also preceding her in death were two sons, Richard Lynn Shaffer and Gary Lee Shaffer, one daughter Marilyn F. Shaffer, one brother, Paul Howard Vandevender and two sisters, Ruth Moore and Gloria Vandevender. Mrs. Shaffer was a homemaker and a member of the Albany First Church of the Nazarene. A graveside service will be held at 1:30 pm Sunday, December 22, 2019 at the Maplewood Cemetery in Elkins. Pastor Terry Burgess will officiate and interment will follow. In lieu of flowers, the family request memorial contributions are made to the American Lung Association, 55 W. Wacker Drive, Suite 1150, Chicago, IL 60601 or [email protected] in memory of Mrs. Shaffer. The Tomblyn Funeral Home of Elkins is in charge of the arrangements for Hazel L. Shaffer. Condolences may be expressed to the family at www.tomblynfuneralhome.com.

The family of Hazel Leigh Shaffer created this Life Tributes page to make it easy to share your memories.