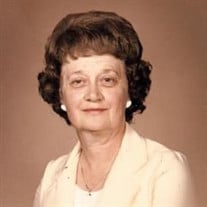 Helen Virginia Harper Shiflett, age 95 years, departed this life to her eternal home, early Saturday morning April 28, 2018 at Colonial Place. She had been in declining health. Helen was born September 4, 1922 in Beverly, the only daughter of the late Ernest and Margaret Weese Harper. She graduated from Beverly High School in 1939, a year early due to receiving a double promotion in first grade. She went to work at G. C. Murphy Co. immediately where she worked until her retirement as Assistant Manager. On July 20, 1942 she married the love of her life Robert Gray Shiflett who preceded her in death on May 14, 1993. Also preceding her in death was her oldest daughter, Canda Lea Ware on July 12, 2015. Left to cherish Helen’s memory is her daughter Vickie (Troy) Ware, three grandchildren, Scott (Vanessa) Ware, Kristina (Manny) Ardeljan and Robert (Amy) Ware and six great-grandchildren, Tyler Ware, Devin, Jaxson and Andrew Ardeljan, Alyssa and Elizabeth Ware and two special cousins, Ella Ruth Montoney and Donna (Kenny) Weese. Helen was a devoted member of the Beverly United Methodist Church where she served on many committees as well as the Women’s Group. She was past member of the John Hart Chapter DAR, Randolph Chapter No. 74, Order of the Eastern Star, Randolph Rebekah Lodge No. 200, life member of Beverly Women’s Club, Beverly Alumni Association, Randolph County Retired School Employees and volunteered for many years at Davis Memorial Hospital. Friends may call from 5:00 pm until 7:00 pm Wednesday, May 2, 2018 at the Tomblyn Funeral Home in Elkins. A funeral service will be held at 11:00 am, Thursday, May 3rd from the funeral home chapel with Rev. David Thompson and Rev. Gary Phillips officiating. Interment will follow in the Beverly Cemetery. Memorial contributions may be made to the Beverly United Methodist Women, P. O. Box 130, Beverly, WV 26253 or Mountain Hospice, 1600 Crim Avenue, Belington, WV 26250 in memory of Helen. The Tomblyn Funeral Home is in charge of the arrangements for Helen Virginia Harper Shiflett. Condolences may be expressed to the family at www.tomblynfuneralhome.com.

Helen Virginia Harper Shiflett, age 95 years, departed this life to her eternal home, early Saturday morning April 28, 2018 at Colonial Place. She had been in declining health. Helen was born September 4, 1922 in Beverly, the only daughter... View Obituary & Service Information

The family of Helen Virginia Harper Shiflett created this Life Tributes page to make it easy to share your memories.