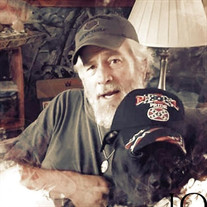 Herbert L. “Herbie” Schoonover, a resident of Parsons, died on Sunday, October 13, 2019 at the age of 54. He was in his usual health and death was unexpected. Born on October 13, 1965, he was the son of Patricia B. Somerville of Elkins and the late Robert J. Schoonover. On March 24, 2001 he was married to Deborah “Debbie” Sydnes who survives. Also surviving are three sons, Nick Schoonover of Parsons, Lee Schoonover of Australia, and Wiley Raines of Calhoun County; two daughters, Whitney Schoonover of Key West, FL and Whitney Raines of Atlanta, GA; two brothers, Shawn Collett of Pittsburgh, PA and “Sherm” Collett of Port St. John, FL; four sisters, Lisa Watring (Dale) of Huntsville, AL, Debbie Sullivan (Mike) of Orlando, FL, Cindy Holliday (Roger) of Elkins and Sallie Davis (Eli) of Morgantown, WV; and special nephew, Nathan Collett of Melbourne, FL. He is also survived by many special aunts, uncles, nieces and nephews. He was a 1984 graduate of Elkins High School and was a Veteran of the United States Navy. He was a member of HW Daniels Post 29 American Legion and the First Baptist Church of Parsons. He was an avid hunter and fisherman and loved spending time outdoors. Friends may call from 6:00 pm until 8:00 pm Thursday, October 17, 2019 at the Tomblyn Funeral Home in Elkins. A funeral service will be held at 11:00 am Friday October 18th, from the funeral home chapel with Pastor Greg Smith officiating. Interment will follow at the American Legion’s Little Arlington Cemetery where full military rites will be accorded by members of the Navy Honor Guard, HW Daniels Post 29 American Legion and Tygart Valley Post 3647 Veterans of Foreign Wars. The Tomblyn Funeral Home of Elkins is in charge of the arrangements for Herbert L. “Herbie” Schoonover. Condolences may be expressed to the family at www.tomblynfuneralhome.com.

The family of Herbert L. "Herbie" Schoonover created this Life Tributes page to make it easy to share your memories.

Herbert L. “Herbie” Schoonover, a resident of Parsons, died on...