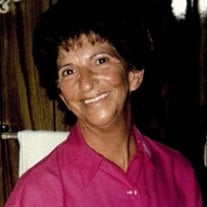 Ialanta “Jeanie” Woolwine, age 76 years, a resident of Beverly, passed away Wednesday, February 27, 2019 at her home after a courageous battle with cancer. Jeanie was born January 2, 1943, in Coalton, the daughter of the late Celia M. and Francesco Primavero. Jeanie is survived by her husband, Bruce Woolwine, daughter Brenda Kay Vanscoy and husband Ted of Montrose, one grandson, Heath Vanscoy, and one granddaughter, Loryn Vanscoy, both of Morgantown. Also surviving are six sisters, Amelia “Sis” Thompson and husband Cecil of Eugene, Oregon, Marie Brady of Junior, Gilda Browning of Elkins, Millie Hammonds of Coalton, Cathy Daniels and husband Cliff of Clearwater, Florida, Mary Bethke and husband Bill of Montrose and two brothers, Frank Primavero and wife Reva of Ohio and Geno Primavero and wife Dotty of Coalton. Jeanie will also be missed by several nieces and nephews. Also preceding Jeanie in death was her mother-in-law Erma Woolwine, father-in-law Roy Woolwine, two brothers, Salvadore “Sammy” Primavero and Michael Primavero and her beloved companion Sassy. Jeanie herself was quite sassy, hilarious, and had a sharp wit. When she wasn’t visiting Wheeling Island, she was whipping up a tasty batch of her homemade pasta sauce that was revered in the family for years. It wasn’t too long ago that the grandchildren finally discovered the secret to the sauce – it was Prego. In addition to her culinary skills, Jeanie was quite the skilled gardener, with rose bushes that put the flowers at the Kentucky Derby to shame. Jeanie also enjoyed cleaning, organizing and simply enjoying the outdoors. She enjoyed her lifelong career at Davis Memorial Hospital and volunteering for the emergency squad. Jeanie was an avid computer gamer, so long as the games involved slots. Jeanie would call her grandchildren often, especially when she had computer problems, and they would act as her own personal Dell support line. Jeanie lived life to the fullest, loved her family fiercely, and will forever be missed. The family will receive friends from 9:00 am until 11:00 am Saturday, March 2, 2019 at St. Brendan Catholic Church in Elkins. A Mass of Christian Burial will be celebrated at 11:00 am Saturday, March 2, from the church with Father James O’Connor as the Celebrant. In lieu of flowers, the family suggests that donations may be made to Mountain Hospice, Inc., 1002 South Crim Avenue, Belington, WV 26250 or St. Brendan Catholic Church, 181 St. Brendan Way, Elkins, WV 26241 in memory of Jeanie. The Tomblyn Funeral Home of Elkins is in charge of the arrangements for Ialanta “Jeanie” Woolwine. Condolences can be expressed to the family at www.tomblynfuneralhome.com.

Ialanta &#8220;Jeanie&#8221; Woolwine, age 76 years, a resident of Beverly, passed away Wednesday, February 27, 2019 at her home after a courageous battle with cancer. Jeanie was born January 2, 1943, in Coalton, the daughter of the late Celia... View Obituary & Service Information

The family of Ialanta Jeanie Woolwine created this Life Tributes page to make it easy to share your memories.