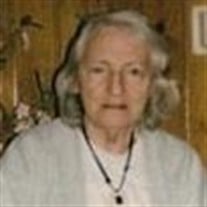 Irene L. Daniels Eppler, age 90 years, a resident of Huttonsville, passed away Monday morning, January 28, 2019 in the Elkins Rehabilitation & Care Center. She was born February 26, 1928 at Long Island, NY a daughter of the late August and Catherine Malchke Daniels. On December 7, 1944 at New York City, NY, she was married to Edward J. Eppler who preceded her in death October 1, 1995. They had celebrated over fifty years of marriage. She is survived by three sons, Edward J. Eppler of Ferry, PA, Robert J. Eppler of Huttonsville, WV and William C. Eppler of Braidwood, IL. Eleven grandchildren, twenty one great grandchildren and two great great grandchildren also survive. Also preceding her in death were two brothers, William and Julius Daniels, three sisters, Margaret Evans, Emiala Gray and Katherine Mullon, and one great granddaughter, Lillian Ross. Irene had lived in New Jersey for fifty eight years, then for five years in Illinois and then moved to West Virginia. She had retired from Shop Rite in New Jersey where she was a meat wrapper and head scaler for over twenty five years and had been a member of the Meat Union VFCW Local 464A. She had been a member of St. Rose Catholic Church of Lima, NJ and after moving to West Virginia became a member of St. John’s Catholic Church in Huttonsville and then Saint Brendan Catholic Church in Elkins. Private interment will be held at Saint Rose of Lima Cemetery in Freehold, NJ. Memorial contributions may be made to the Appalachian Wounded Warrior Project, 661 Point Mountain Road, Valley Head, WV 26294 in memory of Irene. The Tomblyn Funeral Home of Elkins is in charge of the arrangements for Irene L. Daniels Eppler. Condolences may be expressed to the family at www.tomblynfuneralhome.com.

Irene L. Daniels Eppler, age 90 years, a resident of Huttonsville, passed away Monday morning, January 28, 2019 in the Elkins Rehabilitation & Care Center. She was born February 26, 1928 at Long Island, NY a daughter of the late August and... View Obituary & Service Information

The family of Irene L. Eppler created this Life Tributes page to make it easy to share your memories.