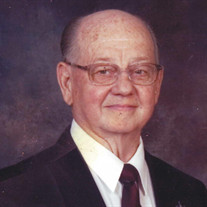 Jack Basil was born in Elkins, Dec.1, 1929 to Martin and Goldie Basil, and the youngest of 7 children, Delores, Elizabeth, Ruth, Harry, Effie and Robert. He received his early education in the Randolph County Schools, and after serving in the U.S. Navy during the Korean Conflict, he attended Davis and Elkins College and then West Virginia University, graduating with a Master’s Degree in Music Education. Jack married Dorothy Catherine Sanders, who preceded him in death 2007. She was the daughter of Lloyd and Nora Sanders, the youngest of 5 children, Charles, Gerald, Sherwood and Junior. Jack and Dorothy have two sons, one being Brad and two grandchildren, Dylan and Madison, the youngest son Marty is married to Edie Basil of Elkins. Jack is survived by his sister-in-law, Eileen (Robert) Basil of Boca Raton, Florida. He is also survived by cousins, James Bazzle and family; Wanda (Carl Jr.) Basil and family; Larry Bazzle and family of Williamsburg, VA. His nephews and nieces - George “Butch”and Delsey Kniley and family, Roberta “Bobbie” Valentine and family, Lewis and Susie Ware and family, Donnie and Sonya Corbin and family, Brenda and Tom Romine and family, Randy and Betsy Jones and family, Bill and Cheryl Basil and family, Jon and Cindy Basil and family, Kay Kessee and family, all of the Elkins area; Charles “Buck” and Barbara Wilburn and family of Bridgeport, WV; Rev. Robert and Sonnie Kniley of Marietta, Ohio. Jay and Mary Jane Sullivan and family of Boca Raton, Florida. Surviving on his wife’s side is his sister-in-law, “Sunny Sanders of Fredericksburg, VA; his nieces and nephews Linda Williams and family, Richard “Dickie” and Kristina Sanders and family of Millville, PA. He is also survived by his nephew, Charles “Chuck” and Christina Sanders and family; Mrs. (Tom) Sandra (Erickson) Sanders and family, Dianne DeMotto and family and “Cindy” Sanders and family, Patricia Sanders Ruoff, Dayton, Ohio), Tara Sanders Shaver family, Kristin Sanders Mahoney family, all of Elkins. And Jack’s lunch pal – Kevin “Woody” Woodcock … and to all who’ve been mentored by him…his passion was to teach young lives the “art” of music! Jack began directing the Chancel Choir at the First United Methodist Church of Elkins upon his graduation from WVU in 1953, and his teaching career in Randolph County as band director at the Homestead School, and assistant to Randolph County Music Supervisor. He then became Elkins Junior High School Band director where he taught for 5 years. In 1960 he became the Elkins High School Band Director that was known for its “high-stepping show” style, which began under the direction of Clark ‘Prof’ Siedhoff. The band was one of the most popular and well-traveled high school bands in West Virginia. He also began instrumental teaching for all of the Elkins elementary schools, choir director at Elkins High School, and band director at Beverly K12 School. In 1975 Basil retired as EHS Band Director and became Randolph County Music Supervisor, and also began the Randolph County Solo and Ensemble Festival. 1980 he accepted the challenge of band director in 1980 succeeding Howard Kittle at Elkins Junior High School and remained there along with the position as Randolph County Supervisor until he retired in 1985. He received awards for Randolph County Teacher of the Year 1984 and WV Bandmaster 1984, and taught school in Randolph County from 1953 – 1985. He received the first Hero Hall of Fame award in 2001, and in 2007 received the I.O.O.F. Humanitarian of the Year. He had served as volunteer many years with the local elementary school 5th grade bands. In 2010 Jack was selected as the Mountain State Forest Festival Grand Parade Marshall after marching hundreds of miles in it with the marching bands and the famous WV Highlander Bagpipe Band. Aside from professional accomplishments, he enjoyed playing his trumpet in Big Band groups, organized a barbershop quartet - The Centennials, and other groups such as the Glory Land Band. As a hobby Jack has painted wildlife in favorite West Virginia scenes, participated in local art shows for many years, also having many accepted in the WV Dept. of Natural Resources Wildlife Calendar. Friends may call from 4:00 pm until 8:00 pm Wednesday, July 20, 2016 at the Tomblyn Funeral Home in Elkins. On Thursday, July 21st he will be moved to the First United Methodist Church in Elkins for visitation from 9:00 am until 10:00 am the funeral hour. Rev. Dr. Basil A. Hensley and Rev. Dallas Forren will officiate and entombment will follow in the Mountain State Memorial Gardens Mausoleum near Gilman. Memorial contributions may be made to the Elkins Area Bands Auxiliary, PO Box 821, Elkins, WV 26241 in memory of Mr. Basil. The Tomblyn Funeral Home of Elkins is in charge of the arrangements for Mr. Jack Basil. Condolences may be expressed to the family at www.tomblynfuneralhome.com.

Jack Basil was born in Elkins, Dec.1, 1929 to Martin and Goldie Basil, and the youngest of 7 children, Delores, Elizabeth, Ruth, Harry, Effie and Robert. He received his early education in the Randolph County Schools, and after serving in the... View Obituary & Service Information

The family of Jack Basil created this Life Tributes page to make it easy to share your memories.