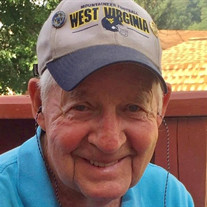 Jack M. Lewis, Sr., age 86 years, a resident of Beverly, went peacefully to meet his Lord and Savior Monday, October 9, 2017 after a brief illness. He was born, January 17, 1931 in Douglas, WV the son of the late Chester and Edith Lewis. On August 22, 1955 in Fairmont, WV he was married to Mary Anna Popp Lewis who preceded him in death May 26, 2013 after 58 years of marriage. He is survived by daughters, Mari Lewis of Weirton, WV, Cheryl Sturm and husband Budd of Farmland, IN and Patti Lewis of Beverly. Sisters, Mabel and Linda and brothers, Bobby and Foster. Grandchildren, Crystal, Sean, Karhma and Nicole, eight great grandchildren and several nieces and nephews also survive. Also preceding him in death was a son, Jack, Jr., sisters, Betty and Martha, and brother Gilbert. Jack enjoyed playing baseball growing up and went on to graduate from Fairmont State College with a Bachelor Degree in electrical engineering. He served as a Paratrooper with the United States Army during the Korean War. Jack retired after a distinguished career in 1993 from Verizon. He had a love for planes, trains and all of his family. He was a friend to all. He was a member of the Knights of Columbus and the St. Brendan Catholic Church, in which he was actively involved. He enjoyed spending time visiting with his family, serving at his church, gardening, sail boating and loved Santa and the spirit of Christmas. His favorite food was shrimp and all sweets! Friends may call from 10:00 am until 11:00 am Friday, October 13, 2017 at St. Brendan Catholic Church. A Mass of Christian Burial will be celebrated at 11:00 am from the church with Father Chapin as the celebrant. Interment will follow in the St. Brendan Cemetery. Full military honors will be accorded at the gravesite by members of the West Virginia National Guard Honor Guard Program, H.W. Daniels Post 29 American Legion and Tygart Valley Post 3647 Veterans of Foreign Wars. The Tomblyn Funeral Home of Elkins is in charge of the arrangements for Jack M. Lewis. Condolences may be expressed to the family at www.tomblynfuneralhome.com.

Jack M. Lewis, Sr., age 86 years, a resident of Beverly, went peacefully to meet his Lord and Savior Monday, October 9, 2017 after a brief illness. He was born, January 17, 1931 in Douglas, WV the son of the late Chester and Edith Lewis.... View Obituary & Service Information

The family of Jack M. Lewis Sr. created this Life Tributes page to make it easy to share your memories.