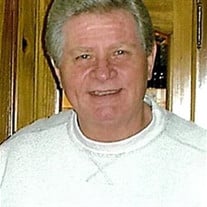 James G. “Jim” Arbogast, age 74 years, a resident of Elkins, passed away Wednesday, May 10, 2017 at the Elkins Rehabilitation and Care Center. He was born May 6, 1943 in Elkins, a son of the late Robert G. and Permilla “Midge” Arbogast. He was married to Carol Workman Arbogast who survives in Elkins. Also surviving are two sons, Timothy Arbogast and wife Vanessa of Elkins and Jonathon Arbogast and former wife Dusti of Elkins, a God daughter, Mary Samantha Jean Martovitz of North Royalton, OH; two sisters, Kathy Leary and husband Greg of Elkins and Sharon Leonard of Pensacola, FL. Three grandchildren, Rhyleigh Jordan, Mark Cullen Arbogast and Domnick Ash and a special niece, Carolyn Martovitz of Ohio also survive. Also preceding him in death was one grandson, Lee Thomas Arbogast. Jim was a graduate of Elkins High School with the Class of 1961. He worked for the United States Postal Service having been employed as a Mail Carrier and Post Master. Following his retirement he worked at Elkins Builders Supply for many years. Jim was a Veteran of the United States Army and a member of H.W. Daniels Post 29 American Legion. He was a member of the Leading Creek Volunteer Fire Department where he had served as Fire Chief. Jim was an avid WVU Mountaineer, Pittsburgh Steeler and Pittsburgh Pirates Fan. He was a member of the Orlena United Methodist Church and a United Methodist Lay Speaker. Friends may call from 6:00 PM until 8:00 PM Monday, May 15, 2017 at the Tomblyn Funeral Home in Elkins. A funeral service will be held at 11:00 AM Tuesday, May 16th from the funeral home chapel with Rev. Harold Langevin and Rev. Eli Hostetler officiating. Interment will follow in the American Legion’s Little Arlington Cemetery where full Military Honors will be accorded by members of the West Virginia National Guard Honor Guard Program, H.W. Daniels Post 29 American Legion and Tygart Valley Post 3647 Veterans of Foreign Wars. Memorial contributions may be made to Leading Creek Volunteer Fire Department, P. O. Box 158, Kerens, WV 26276 in memory of Jim. The Tomblyn Funeral Home of Elkins is in charge of the arrangements for James G. “Jim” Arbogast. Condolences may be expressed to the family at www.tomblynfuneralhome.com.

The family of James G. Arbogast created this Life Tributes page to make it easy to share your memories.