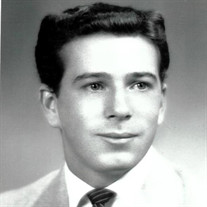 James William “Jim” Crowley, Jr., age 81 years, a resident of Elkins, passed away Monday, August 3, 2020 at Colonial Place under the care of West Virginia Caring Hospice. He was born February 08, 1939 in Elkins, the son of the late James William Crowley, Sr., and Nelle Kimbel Crowley. Jim is survived by his wife Wilma celebrating fifty five years of marriage and one son, James Edward Crowley of Lake Worth, FL. Jim graduated from Elkins High School with the Class of 1957 lettering in three sports, football, basketball, and track. He attended Davis and Elkins College for three years. Jim was a former employee of the State of West Virginia Road Commission and was a graduate of the Fairbanks School of Weights and Measures. He was employed with the West Virginia Weights & Measures for thirty five years as an Inspector, Area Supervisor and State Wide Supervisor prior to his retirement. He was a former member of the National Conference of Weights & Measures serving on the Specification & Tolerance Committee, the Southern Conference of Weights & Measures, served on the LP Gas Safety Committee and had worked on various projects with the National Bureau of Standards. He was a member of the Elkins Fire Department for thirty five years serving as Fireman, Captain, Training Officer, Secretary, Treasurer, and President. Jim served as a volunteer for the Mountain State Forest Festival for sixty years. He worked with the Elkins High School football program for fifty one years as a statistician, game official, and game clock operator. He was the founder and first President of the Cheat Valley Football Officials Association, an on-field game official for twenty years, including 236 games at Wimer Field and served as a WVSSA basketball game evaluator of officials. Jim served as Chairman of the committee to restore free physical examinations for all Randolph County athletes. He was a member of the original Board of Directors of the Frank Wimer Little League Football, the Founder and Chairman of the former Elkins Jr. High School All Sports Banquet and was a Coordinator of the first Punt, Pass and Kick contest for area athletes, along with the National Sponsor Ford Motor Company. Jim served as a coach and manager of the Elkins Little League Baseball and was a Charter member of the original Davis & Elkins Athletic Boosters Club. He served on the Board of Directors of the West Virginia Railroad Museum and affixed the gold letters and gold striping to the Cass Scenic Railroad renovated locomotives and tenders: ShayNo.1 & ShayNo.4 in 1963. Jim was a former member of the Kiwanis Club of Elkins, receiving the Kiwanian of the Year award in 1984. He was a member of H.W Daniels Post 29 American Legion, Seneca Trail Lodge No. 104 Fraternal Order of Police and served on the State FOP Board of Trustees for fourteen years. Jim was a member of the First United Methodist Church of Elkins serving as President of the Methodist Men for sixteen years. If you wish to remember Jim do something good for someone in need…. just don't tell the whole world about it. Jim’s request for cremation has been honored. A memorial service will be held at a later date. Contributions may be made to the First United Methodist Church, 315 Kerens Ave., Elkins, WV in memory of Jim. The Tomblyn Funeral Home of Elkins is in charge of the arrangements for James William “Jim” Crowley, Jr. Condolences may be expressed to the family at www.tomblynfuneralhome.com.

The family of James W. Crowley Jr. created this Life Tributes page to make it easy to share your memories.