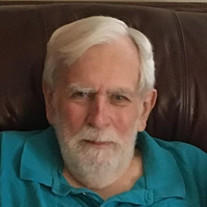 James “Jim” Gratton Fisher II of Elkins, WV was a kind, loving, and intellectually curious brother, father, grandfather, uncle, and friend. He passed away on Monday, November 22nd, 2021 at Ruby Memorial Hospital in Morgantown, WV. He was 76 years old. Jim was born to James and Ida Fisher in May 1945 in Williamson, WV. He enjoyed his childhood in “Happy Valley,” often retelling stories of growing up with his three siblings. He fondly remembered hillside explorations and adventures climbing the “Big Rock” behind the family home. He was a 1963 graduate of Williamson High School. During the Vietnam War, he was a member of the United States Air Force, where his job as an aircraft mechanic sent him all over the world. He shared memories of his time spent on Nakon Phanom Air Base (NKP) in Thailand. Once, he lamented how his shift schedule spoiled the results of the 1968 World Series, where his favorite St. Louis Cardinals lost to the Detroit Tigers in seven games. After his time in the Air Force, he attended Marshall University where he met his wife, Patricia. The two moved to Roanoke, VA when he started a career with Norfolk & Western Railway (later Norfolk Southern). During his time with the railroad, Jim and Pat moved between Roanoke and Norfolk, VA, and grew their family with two children, Johanna and James. In the 90s, his career changed when he took ownership of a small motel in Elkins, WV. He enjoyed many aspects of running the business, but specifically cherished developing relationships with his employees. He was thankful for and proud of the contributions of his longtime staff at the motel. As a father, he was endlessly supportive of his two children, as well as his many nieces, nephews, and grandchildren. He never hesitated to answer the phone and lend an ear. When his daughter Johanna would go for runs in high school and college, he would drive alongside to ensure her safety. When his son Jim took accounting courses in college, he tediously rewrote balance sheets over the phone to tutor him. In his free time, he loved to follow sports. His fandom was perhaps best described by a bumper sticker that once adorned his 1979 Oldsmobile Cutlass Supreme, “My favorite teams are WVU and whoever beats Pitt!” He also had an encyclopedic knowledge of high school football and basketball scores from across West Virginia, Kentucky, and Virginia. He loved to root for the underdog and leave late night voicemails with score updates. In recent years, he spent time reengaging with extended family and former classmates over long phone onversations. Having reconnected with cousins in Nebraska, he drove out for a family reunion. He loved to love family, and showed it by sending unexpected treats, ranging from candy, to cashews, and even King Crab legs. “I like to buy things for people they wouldn’t buy themselves,” he would say. Ever the optimist and daydreamer, he was always scheming. Whether it was a road trip to a ranch in Wyoming, or a catered dinner for all of his relatives, he wanted to enjoy life and help others do so. With his big white beard, he drew an uncanny resemblance to Santa Claus, winking at kids in grocery stores and telling them he was, “Santa Claus’ brother.” He loved to buy presents and secretly deliver them to the kids that lived next door. His presence, joyful laugh, and generosity will be missed by many. Jim was preceded in death by his parents (James and Ida) and his wife (Patricia). He is survived by his siblings (Martin (Bonnie) Fisher of Green Bay, WI, Johanna (Jim) Stewart of Morgantown, WV, and Neal (Deborah) Fisher of Charlotte, NC) and his children (Johanna (Scott) Biola of Elkins, WV and James (Gina) Fisher of Pittsburgh, PA). He is also survived by the grandchildren he adored: Julia, Seneca, and Cecilia Biola and Violet and Sylvie Fisher. In lieu of flowers, please consider donating to the Randolph County Humane Society, PO Box 785, Elkins, WV 26241 (304-636-7844) in his memory. The Tomblyn Funeral Home of Elkins is in charge of the arrangements for James “Jim” Gratton Fisher, II. Condolences may be expressed to the family at www.tomblynfuneralhome.com.

The family of James Gratton Fisher, II created this Life Tributes page to make it easy to share your memories.