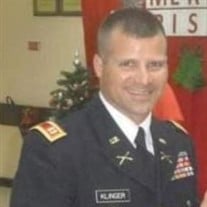 James E. “Jim” Klinger, age 53 years, a resident of Coalton, passed away Thursday evening, April 14, 2022 at his home, surrounded by his family and under the care of West Virginia Caring Hospice. He was born September 12, 1968 at Lebanon, PA, a son of James R. and Barbara A. Heverling Klinger of Millsboro, DE. On May 7, 2005 at Kannapolis, NC he was married to Victoria Lynn Nethken who survives. Also surviving are two sons, Mitchell W. Howell of Kannapolis, NC, Ashton G. Howell of Coalton and one daughter, Jacklyn M. Howell of Coalton. One brother, Robert Klinger of Salisbury, NC and two sisters, Robin Willard of Reading, PA, Marcia Seville of Millsboro, DE and his mother-in-law, Donna Nethken Long of Coalton. He was preceded in death by his fathers-in-law, Rodger Nethken and Bruce Long. Jim graduated from Kutztown University with a Bachelor’s Degree in Telecommunications. He was a retired Captain with the United States Army and North Carolina National Guard. During his military career, he served during the Global War on Terrorism, Operation Iraqi Freedom and a Peacekeeping Mission at Mount Sinai, Egypt. He later worked for the West Virginia Department of Highways, District 8 as an analyst. The family would like to extend a special thanks to the West Virginia Department of Highways, Davis & Elkins College Nursing Division, Faculty and nursing students, Jason Vandevender, the Davis Medical Cancer Center Staff, West Virginia Caring Hospice and family and friends who extended love and support throughout Jim’s illness. The family will receive friends from 5:00 pm until 7:00 pm Wednesday, April 20, 2022 at the Tomblyn Funeral Home in Elkins. A funeral service will be held at 7:00pm Wednesday from the funeral home chapel with Deacon Raymond Godwin officiating. Cremation will follow. The Tomblyn Funeral Home of Elkins is in charge of the arrangements for James E. “Jim” Klinger. Condolences may be expressed to the family at www.tomblynfuneralhome.com.

The family of James Edward "Jim" Klinger created this Life Tributes page to make it easy to share your memories.