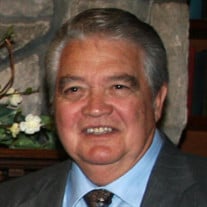 James Thomas Stalnaker, 78, of Elkins passed away on Dec. 5, 2019, at his home surrounded by family and loved ones. Jim was born in Elkins on June 20, 1941, to James Richard and Ruth Sponaugle Stalnaker. He was united in marriage on Oct. 18, 1962, to Carolyn Evick, who survives in Elkins. He also is survived by son, Richard Bradley Stalnaker and wife Becky of Morgantown; a grandson, Evan B. Stalnaker of Huntington; granddaughter, Jessica Stalnaker of Morgantown; brother, Fonso O. Stalnaker and wife Karen of Fairmont; and sister, Debbie Stalnaker Riddlebarger of Elkins. Jim also is survived by several nieces, nephews and cousins that he dearly loved. Jim attended Randolph County schools. He graduated from Elkins High School in 1959 where he was co-captain of the football and basketball teams in 1958 and 1959. He also was an all-conference basketball selection and was the Tigers leading scorer, playing on two Big Ten Conference Championship teams. Jim attended Potomac State College and was inducted into the Randolph County Athletic Hall of Fame in 1994. Jim retired from Memorial General Hospital and Davis Memorial Hospital in 1997 with 45 years of service. He then worked for Drs. Topping and Pavlovich until his retirement in 2017. He also was owner and operator of JT Auto Sales. He was a member of BPOE Lodge 1135, served in the West Virginia National Guard and was a member of the American Society of Radiologic Technologists. Jim always felt blessed that for many years he was able to fish, hunt, golf and ride motorcycles with son Brad and grandson Evan. Family and friends will be received from 4:00 pm until 7:00 pm Monday, December 9, 2019 at Tomblyn Funeral Home in Elkins. A funeral service will be held at 11:00 am Tuesday, December 10th from the funeral home chapel with Rev. Brian Seders and the Rev. Dr. Basil A. Hensley officiating. Interment will follow at Mountain State Memorial Gardens near Gilman. In lieu of flowers, memorial contributions may be made to Mountain Hospice, 1002 South Crim Avenue, Belington, WV 26250 or to the First United Methodist Church, 315 Kerens Avenue, Elkins, WV 26241 in memory of Jim. The Tomblyn Funeral Home of Elkins is in charge of the arrangements for James Thomas Stalnaker. Condolences may be expressed to the family at www.tomblynfuneralhome.com.

James Thomas Stalnaker, 78, of Elkins passed away on Dec. 5, 2019, at his home surrounded by family and loved ones. Jim was born in Elkins on June 20, 1941, to James Richard and Ruth Sponaugle Stalnaker. He was united in marriage on Oct. 18,... View Obituary & Service Information

The family of James Thomas "Jim" Stalnaker created this Life Tributes page to make it easy to share your memories.