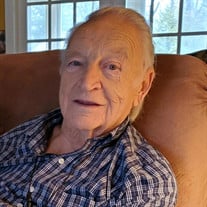 James Ray “Jim” Thornhill, 83, of Alexandria, VA, left this world to be with his beloved wife and son's on Friday, April 2, 2021. Jim was the only son of the late Lambert James and Ethel (Joseph) Thornhill of Elkins. He was the grandson of the late Albert and Aneliza (Phillips) Thornhill and G. George and Mary Barbara Joseph. As a child, Jimmy attended the St. Brendan’s Catholic School where he was an Altar Boy. He was a 1955 graduate of Elkins High School. Jim was a member of the cast of the senior play "Cheaper by the Dozen" where he gave a spirited performance. After graduation he furthered his education at Davis and Elkins College and graduated in 1959 with a Bachelor’s of Science Degree in Business Administration. While in college Jim was a member of the Beta Alpha Beta Fraternity and the Neuman Club. While attending school he worked in two family businesses, G. George Men's Clothing Store and Joseph's Newsstand where he was the most popular shoe shiner. Jim married the former Barbara Jean Willoughby, daughter of the late John and Leola (Daft) Willoughby, of Elkins on August 1, 1959. They remained married until her death on July 1, 2019. The couple moved to Charleston where he was employed by Union Carbide. Around 1964 Jim and his family moved to Virginia where he remained until August of 2020. He was the owner of The Mount Vernon Driving School. During his long career as a driving instructor he taught the children of many Washington Redskins football players as well as a former Miss. Virginia. After retiring, Jim enjoyed spending time with his family and sitting on his front porch. He also enjoyed working word puzzles and watching his favorite Westerns and Tarzan movies. He spent the last 8 months of his life living in Sellersville, PA to be closer to his loving daughter Tracey, son-in-law, Roy and grandson, Daniel Hausman of Dublin, PA. He is also the grandfather of Joshua and his wife Amanda Hausman of Pittsburgh, PA. He was over the moon when he became a Great Granddad to Abigail Rose in 2019. He was very proud of her and greatly enjoyed their visits. James was very popular among the staff at The Community at Rockhill where he resided until his death. They couldn't get enough of his southern accent. He was the father of two sons, both of whom preceded him in death, an infant son, John Lambert, April 1961 and James Ray, Jr. who passed away April 26, 2019. Also mourning his death is his sister, Jacquline (Thornhill) Bright, brother-in-law Robert Bright, niece, Mary Bright Crowder and her fiancée Andrew Thompson of Elkins, nephew Robert Bright, Jr., his wife Mary Jane of Fort Ashby, WVA and their daughter Nicole of Huntington, WV. Sisters and brothers-in-law, Mamie (Willoughby) Ghadimi, Frank Ghadimi of Tampa, FL, Connie (Willoughby) Wachsmuth, Reverend Harry Wachsmuth of Waldorf, MD, Sharon (Willoughby) Melton and her husband Leslie of Charleston, WV. Jim will also be remembered by many other nieces and nephews. "I am the resurrection and the life. The one who believes in me will live, even though they die, and whoever lives by believing in me will never die" John 11:25-26. A graveside service will be held at 11:30 am Saturday, May 1, 2021 at St. Brendan Cemetery. Deacon Raymond Godwin will officiate. At the request of the family, masks and social distancing will be required for everyone attending the service. The Tomblyn Funeral Home of Elkins is in charge of the arrangements for James Ray “Jim” Thornhill. Condolences may be expressed to the family at www.tomblynfuneralhome.com.

James Ray &#8220;Jim&#8221; Thornhill, 83, of Alexandria, VA, left this world to be with his beloved wife and son's on Friday, April 2, 2021. Jim was the only son of the late Lambert James and Ethel (Joseph) Thornhill of Elkins. He was the... View Obituary & Service Information

The family of James Ray Thornhill created this Life Tributes page to make it easy to share your memories.