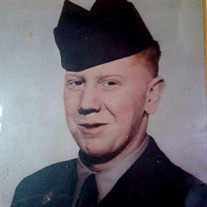 James D. “Pap” White, age 83 years, a resident of Elkins, passed away Saturday, August 4, 2018 at Valentine Personal Care Home under the care of Mountain Hospice. He was born March 11, 1935 at Wymer, a son of the late Melvin M. and Bertha Simmons White. He was twice married, formerly to the late Ocie Hedrick and then to Charlene Hedrick White who preceded him in death March 1993. He is survived by two sons, Timothy White and wife Stephanie of Elkins and Clayton “Brett” White of Elkins; two daughters, Bertha “Sis” White of Elkins and Donna Martin of North Carolina. Seven grandchildren, Alan, Tiffany, Sabrina, Chris, Heather, Samantha and Victoria and eight great grandchildren also survive. Also preceding him in death were one son, James D. “Donnie” White, three brothers and his beloved dachshunds, Spike and Ike. He was the last surviving member of his immediate family. He was a Veteran of the United States Army having served during the Korean War. Pap was a heavy equipment operator for the WV Department of Natural Resources prior to his retirement. He loved to hunt, farm, and riding his 4-wheeler. He was a member of Tygart Valley Post 3647 Veterans of Foreign Wars, HW Daniels Post 29 American Legion and the Golf Street Church of Christ. Friends may call from 10:00 am until 12:00 pm Wednesday, August 8, 2018 at the Tomblyn Funeral Home in Elkins. A funeral service will be held at 12:00 pm Wednesday from the funeral home chapel with Rev. Eli Hostetler officiating. Interment will follow in the American Legion’s Little Arlington Cemetery where full military honors will be accorded by members of the West Virginia National Guard Honor Guard Program, Tygart Valley Post 3647 Veterans of Foreign Wars and HW Daniels Post 29 American Legion. The Tomblyn Funeral Home of Elkins is in charge of the arrangements for James D. “Pap” White. Condolences may be expressed to the family at www.tomblynfuneralhome.com.

The family of James D. "Pap" White created this Life Tributes page to make it easy to share your memories.