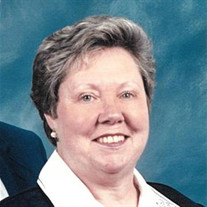 Janet Fay Calain Baldassano, age 75 years, a resident of Elkins and recently a resident of Lavender Fields Assisted Living in Beverly, passed away Saturday evening, December 8, 2018. She was born June 27, 1943 in Bowden, a daughter of the late George L. and Estie Marie Tingler Calain. On September 12, 1964 at Our Lady of Sorrow Church in New York City, she was married to Paul N. Baldassano who preceded her in death. She is survived by one sister, Linda and husband John R. “Bob” Vance of Elkins and two brothers, Harold Calain and wife Susie of Elkins and Walter Calain and wife Sharon of Louisville, KY. Loving friends and neighbors, Ben and Bernice Backus, several nieces, nephews, great nieces and great nephews also survive. Also preceding her in death were five brothers, her twin, Donald Calain, Randolph Calain, George Calain, Jr., John M. Calain and infant brother John Montgomery Calain. Janet moved to Queens, NY in 1961 and worked for Hartford Insurance Company in New York City and later worked for the City of NY with the Board of Education in the Food and Nutrition Service. She and her husband returned back home to Elkins in 1992. She loved cooking, baking and was a member of Saint Brendan Catholic Church of Elkins. Friends may call from 1:00 pm until 2:00 pm Monday, December 10, 2018 at the Tomblyn Funeral Home in Elkins. A funeral service will be held at 2:00 pm Monday from the funeral home chapel with Father Jim O’Connor and Sister Mary Ella Morrison Presiding. Interment will follow in Saint Brendan Cemetery. The family suggests that memorial contributions may be made to the Cancer Care Center, 801 Harrison Avenue, Elkins, WV 26241 in memory of Janet. The Tomblyn Funeral Home of Elkins is in charge of the arrangements for Janet Fay Calain Baldassano. Condolences may be expressed to the family at www.tomblynfuneralhome.com.

Janet Fay Calain Baldassano, age 75 years, a resident of Elkins and recently a resident of Lavender Fields Assisted Living in Beverly, passed away Saturday evening, December 8, 2018. She was born June 27, 1943 in Bowden, a daughter of the late... View Obituary & Service Information

The family of Janet Fay Baldassano created this Life Tributes page to make it easy to share your memories.