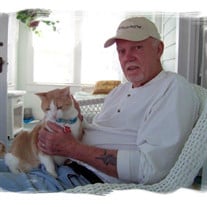 Jay Alexander Anderson, age 85 years, passed away Friday, August 6, 2021, at Mountain Memories Assisted Living & Retirement Center. He was born February 8, 1936 at Philadelphia, PA. He was the son of the late John Anderson and Marie Qualey Anderson. On October 30, 1982, in Norristown, PA, he was married to Karen Armentrout Anderson, who survives in Elkins, one daughter, Kecia Kona of Elkins, grandchildren, Keiffer Hahn, and Micaiah Hahn both of Cape May, NJ and Kera Jay Hahn of Elkins. He is also survived by his beloved cats. Also preceding him in death were two brothers: John Renauld Anderson, who died in Pottstown, PA in 1990 and Eugene Anderson, who died in a drowning accident as a young child. He attended Philadelphia public and parochial schools and Montgomery County Community College, where he studied addiction counseling. He was licensed as a Certified Addiction Counselor through the Commonwealth of Pennsylvania. He spent the majority of his working career as a group psychotherapist at Eagleville Hospital, a 250-bed drug and alcohol specialty hospital in Montgomery County, PA, retiring and moving to Elkins, WV, in 2005 at age 69. He was a compassionate animal lover and avid saltwater fisherman. He enjoyed fishing with his friends in New Jersey and at his cottage on Chincoteague Island, Virginia. He enjoyed gardening and loved to plant beautiful flowers in the gardens of every house he ever lived in. He was a very spiritual man who had a strong Christian faith and was a member of Woodford Memorial United Methodist Church in Elkins. Mr. Anderson’s request for cremation has been honored. A memorial service will be held at 11:00 am Friday, August 20, 2021 at the Woodford Memorial United Methodist Church in Elkins. Rev. Jeremiah Jasper, Rev. Bill Calhoun and Dennis Deal will officiate. Interment of the cremains will take place at a later date in the Bridgeport Cemetery at Bridgeport, WV. At the request of Mr. Anderson, contributions may be made to the Randolph County Humane Society, 195 Weese Street, Elkins, WV 26241 and/or Animal Friends of Barbour County, PO Box 452, Philippi, WV 26416. The Tomblyn Funeral Home of Elkins is in charge of the arrangements for Jay Alexander Anderson. Condolences may be expressed to the family at www.tomblynfuneralhome.com.

The family of Jay Alexander Anderson created this Life Tributes page to make it easy to share your memories.