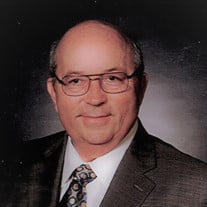 Dr. Jay Crissman, age 75 years, a resident of Elkins, passed away Friday evening, November 19, 2021 at home. He was born in Lewistown, PA, July 21, 1946 to the late George and Mabel Crissman. The family moved from Pennsylvania to Nitro, WV. As a small child, Jay acquired the gift to gab and his favorite pastime was visiting with people on his newspaper route, which he had for several years. Jay spent his elementary and junior high school summers on his uncle’s farm in Lancaster County, PA. He tended the chickens and other farm animals, helped in the fields and rode wagons, all the while dreaming of becoming a veterinarian. During his high school and college years, he spent summers working for Dr. Gordon Phillips in Charleston, WV. He graduated from Nitro High School with the Class of 1964. He then attended West Virginia University where he received his Bachelor of Science Degree in Agriculture in 1968. In 1970, he received his Master of Science Degree in Animal Nutrition and then attended Ohio State University and in 1974 received his Doctor of Veterinary Medicine. After graduation, he moved to Elkins and opened the Beverly Pike Veterinary Clinic. In 1989 -1990, he served the West Virginia Veterinary Medical Association on the Executive Board; 1990-1991 served as Secretary; 1992-1993 served as President Elect. In 1994-1995 he served as President of the WVVMA. In 1997, he served as a Delegate to the American Veterinary Medical Association. Dr. Crissman had also been involved in the Fairmont Veterinary Emergency Clinic, giving of himself in support of it. He had celebrated forty-two years of service to his community. On January 17, 1981 at Elkins, he was married to Karen Patricia “Patty” Smith who survives. Also surviving are two sons, Seth Craig Crissman and wife Any of Houston, TX and Thomas Lee Phillips and wife Lynn of Gloucester, VA; three daughters, Fae Marie Skuya and husband Robert of Lancaster, PA, Lisa Dawn Caruso and husband Vincent J. of Wheeling, WV and Sheela Kaye Cross and husband Brian of Elkins. One brother, Steve Crissman of Angel Fire, NM and one sister, Carol Varner of White Sulphur Springs, WV. Eight grandchildren, two step-grandchildren and three great grandchildren also survive. Over the years, Jay had been involved in numerous community activities, including supporting and advising the Randolph County Humane Society, working 30 years with training DCT students, supporting the Randolph County Library, Randolph County Arts Center and many more too numerous to mention. He was a member of the Davis Memorial Presbyterian Church. Jay had enjoyed several hobbies, including skiing, traveling, landscaping and collecting antique automobiles. Friends may call from 11:00 am until 1:00 pm Tuesday, November 23, 2021 at the Tomblyn Funeral Home in Elkins. A funeral service will be held at 1:00 pm Tuesday with Rev. Dr. Peter A. Vial officiating. Interment will follow in the Maplewood Cemetery. Masks and social distancing are recommended for anyone attending the services. In lieu of flowers, the family has asked that memorial contributions be made to the Randolph County Humane Society, P. O. Box 785, Elkins, WV 26241 or www.rchswv.org in memory of Dr. Crissman. The Tomblyn Funeral Home of Elkins is in charge of the arrangements for Dr. Jay Crissman. Condolences may be expressed to the family at www.tomblynfuneralhome.com.

Dr. Jay Crissman, age 75 years, a resident of Elkins, passed away Friday evening, November 19, 2021 at home. He was born in Lewistown, PA, July 21, 1946 to the late George and Mabel Crissman. The family moved from Pennsylvania to Nitro, WV.... View Obituary & Service Information

The family of Dr. Jay Crissman created this Life Tributes page to make it easy to share your memories.