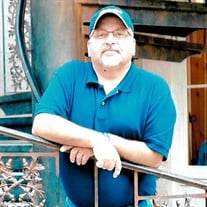 Jeffery Allen Broschart, 57, of Elkins, departed this life at 7:12 p.m. March 8 in Morgantown, following a brief illness. He was born Tuesday, Aug. 30, 1960 in Elkins, a son of the late William Donel and Rose Marie Travise Broschart. Jeff graduated from Coalton High School with the Class of 1978 and received his BS degree from Fairmont State College and his teaching certification from WVU Institute of Technology. On Dec. 1, 1990, he was united in marriage with Elizabeth Christian at St. Patrick Catholic Church in Coalton. He is survived by daughters Angelina Marie-Isabella Broschart (Eric Laskey) of Sharpsville, Pa. and Danielle Alexandria Broschart of Elkins, son William Donel-Cameron Broschart of Elkins, and granddaughter Quinn Alexandria “Fred” Broschart of Elkins. Siblings include David Broschart (Terry) of Jimtown, Suzanne Carter of Jimtown and Edward Broschart (Denise) of Huttonsville and sister-in-law Kathy Broschart. He was preceded in death by his parents, grandparents and siblings Donald Broschart and Vickie Broschart and brother-in-law Bill Carter. Jeff worked at the Randolph Technical Center for nearly 30 years teaching electricity and advanced careers in wind, water and solar power. Each summer he traveled to Marshall University to instruct teachers from across the US to implement the Advanced Careers Program in their school systems. He loved all kinds of music and was passionate about playing his drums. Most recently, Jeff performed with the County Store Opry in Petersburg, Moorefield and Franklin. He played around the Clarksburg/Fairmont area with the Whisky River and the Linda Lee Bands. In Elkins he enjoyed performing with Jesse Milnes and Friends, Appalachian Jazz and Connie Townsend and the Ginsangers. He was a member of the St. Brendan Folk Group. Jeff was a member of St. Brendan Catholic Church, Mountain State Transmitters Amateur Radio Club and the Randolph and Tucker County ARES ham radio groups. His ham radio call sign was KC8OBS. He was a volunteer fire fighter with the Ellamore and Elkins Fire Departments where he is an honorary member. Friends will be received from 5:00 pm to 8 p.m. Tuesday, March 13, 2018 at St. Brendan Catholic Church in Elkins. A Wake Service will be recited at 8:00 pm Tuesday by Deacon Raymond Godwin. The Mass of Christian Burial will be celebrated at 11:00 am Wednesday, March 14th at Saint Brendan Catholic Church with Reverend Father John Chapin Engler as the Celebrant. No matter where Jeff lived or roamed, he always considered Jimtown his home. The Phillips Cemetery at Jimtown is where he will be laid to rest. In lieu of flowers, the family suggests donations be made to Randolph County ArtsBank, PO Box 1933, Elkins, WV 26241 in memory of Jeff. The Tomblyn Funeral Home of Elkins is in charge of the arrangements for Jeffery Allen Broschart. Condolences may be expressed to the family at www.tomblynfuneralhome.com.

The family of Jeffery Allen Broschart created this Life Tributes page to make it easy to share your memories.

Jeffery Allen Broschart, 57, of Elkins, departed this life at...