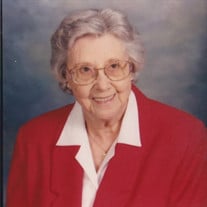 Jennifer A. Starr, age 102 years, a resident of Elkins, WV, and a former resident of Valley Head, WV, passed away Saturday, April 1, 2017 at Colonial Place in Elkins. She was born August 3, 1914 in Webster Springs, WV, a daughter of Thomas and Ada Conrad Harris. She married Edgar S. Starr on October 2, 1933, who preceded her in death on February 3, 1976. She is survived by two daughters, Carolyn Starr Meadows and husband Berman of Kettering, OH, and Sandra Nesbitt of Port Charlotte, FL. One infant daughter, Rosemary Starr, preceded her in death. Two grandchildren survive her, Rebecca Meadows Curti and husband Tom of Liberty Twp, OH, and J. Todd Nesbitt and wife Tammy of Lock Haven, PA. Two grandchildren preceded her in death, Bradley Meadows and Denise Nesbitt Hutter. Five great-grandchildren survive her, Michelle Curti of Charlotte, NC, Alex Curti of Washington, DC, Jamie Curti of Liberty Twp, OH, Jake Curti of West Chester Twp, OH, and Elliot Grace Nesbitt of Lock Haven, PA. Three brothers and 2 sisters preceded her in death, Harry Harris, King Harris, John Harris, Arthelia Harris Hamrick and Mary Frances Harris. She was a member of the Valley Head United Methodist Church and Order of the Eastern Star, Cass, WV. She was a devoted wife, mother, homemaker, grandmother and great-grandmother. She was always there for her family and enjoyed helping her friends and neighbors. Her cooking was loved by all and there were frequent visits from her many nieces and nephews. She kept busy while living at Colonial Place during her later years and was grateful to those who cared for her. Special thanks to the Colonial Place staff, Mountain Hospice, and her great-niece, Brenda Starr. Family will receive friends from 6:00 P.M. until 8:00 P.M. on Friday, April 21, 2017 at the Tomblyn Funeral Home in Elkins. A funeral service will be held at 10:00 A.M. Saturday, April 22nd from the funeral home chapel with Pastor Ann Fretwell officiating. Interment will follow in the Valley Head Cemetery. The Tomblyn Funeral Home of Elkins is in charge of the arrangements for Jennifer A. Starr. Condolences may be expressed to the family at www.tomblynfuneralhome.com.

Jennifer A. Starr, age 102 years, a resident of Elkins, WV, and a former resident of Valley Head, WV, passed away Saturday, April 1, 2017 at Colonial Place in Elkins. She was born August 3, 1914 in Webster Springs, WV, a daughter of Thomas... View Obituary & Service Information

The family of Jennifer A. Starr created this Life Tributes page to make it easy to share your memories.