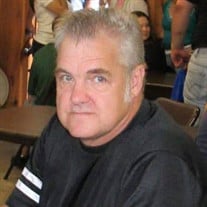 Jerry A. Helmick, age 68 years, a resident of Mabie, passed away Friday evening, May 18, 2018. He was born October 28, 1949 at Elkins a son of the late Ray A. Helmick and Bessie A. Delauder Helmick. On December 17, 1970 he was married to Sandra Joyce George who preceded him in death February 13, 2003. He is survived by one son, Jerry Ray Helmick of Mabie and twin daughters, Sherry Smith and husband Donald of Mabie and Sheila Arbogast and husband Travis of Coalton, one brother, Charles Helmick of Parsons and one sister, Betty Rock of Colorado. Six grandchildren, Sara Eidell and husband Thomas, Emily Roberts and husband Nathan, Donald Rowan, Maranda Roy and husband Seth, Haley Smith and Allison Smith and great grandchildren, Adalynn, Gracelynn, Jeremiah, Uriah, and Jamison and a great granddaughter due in September, Sunny Renee. Jerry was proud to be a Veteran of the United States Army having served during Vietnam. He received the National Defense Service Medal, two Over Seas Service Bars, Bronze Star Medal, Vietnam Service Medal with one Bronze Star and the Vietnam Campaign Meta with 1960 Device. He was employed as a coal miner for Carter Roag Coal Company prior to becoming disabled. He was a Christian by Faith. Friends may call from 6:00 pm until 8:00 pm Thursday, May 24th, 2018 at the Tomblyn Funeral Home in Elkins. A funeral service will be held at 11:00 am Friday, May 25th, from the funeral home chapel with Rev. Richard Bertelli officiating. Interment will follow in the Rowan Memorial Cemetery near Mabie. Full military honors will be accorded at the gravesite by members of the West Virginia National Guard Honor Guard Program, Tygart Valley Post 3647 Veterans of Foreign Wars and H.W. Daniels Post 29 American Legion. The Tomblyn Funeral Home of Elkins is in charge of the arrangements for Jerry A. Helmick. Condolences may be expressed to the family at www.tomblynfuneralhome.com.

The family of Jerry A. Helmick created this Life Tributes page to make it easy to share your memories.

Jerry A. Helmick, age 68 years, a resident of Mabie, passed away...