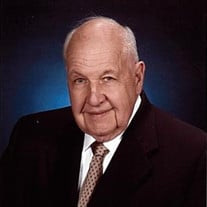 Jim Wilson, 83, of Elkins, passed away on January 29, 2019 at his home. He was born November 3, 1935 in Elkins, son of the late Frank Edison Wilson and Esther Barbara Watson Wilson.Jim was a devoted husband, father, and grandfather who was kind, compassionate, and always greeted people with a warm smile and a twinkle in his blue eyes. He loved his family very much – his wife of 58 years, Mandi, their two children and four grandchildren. He created many family traditions that will be cherished by his family for generations to come. He was proud of his children and grandchildren, supporting them in their various passions and encouraging them in their endeavors. You would often see him at their sporting events cheering them on. Jim had a strong faith and was extremely active in the Davis Memorial Presbyterian Church where he was baptized and married. He served as a Deacon, an Elder, and was elected Elder Emeritus of the church in 2017. He chaired and served on numerous committees, providing many years of faithful and loving service. He cared deeply about others, often visiting the homebound and infirmed. His values and character were shaped early in life. Jim attended Elkins schools, graduating in 1953 from Elkins High where he was awarded the Dr. B. I. Goldman Award for the outstanding graduating Senior Class boy. He graduated from the Wharton School of Finance and Commerce at the University of Pennsylvania in June 1957 after receiving a four-year Navy ROTC scholarship. While at Penn he was a member of the Phi Kappa Sigma Fraternity and developed lifelong friendships with four of his fraternity brothers who would annually get together. After graduation, he was commissioned and served in the US Navy from 1957 to 1960. He obtained the full rank of Navy Lieutenant serving as a Supply and Disbursing Officer. He was very proud to have served his country often saying “those were wonderful years and I would not have traded them for the world.” After active duty he served in the Navy Reserves in Elkins. Jim began his career as a 5th generation lumberman in 1960 when, with his father, they started the Frank E. Wilson Lumber Company. He valued hard work, integrity, and treated others as he would want to be treated. Jim sincerely appreciated his loyal and dedicated office staff and lumber yard employees. He loved being out on the road selling lumber, but more importantly, Jim loved spending time with his customers who became lifelong friends. A lifelong Elkins resident, Jim was active in various civic affairs. As a teen, he had been a member of the Boy Scout Troop 86 and attended the National Boy Scout Jamboree in 1950 at Valley Forge Pennsylvania. In 2016 he received the Allohak Council Distinguished Citizen Award for scouting. He was also a member and served as President of the Tygart Valley Lions Club. He served on various boards throughout his life; was a director of the Valley Supply Company, a director of the Bank of Mill Creek, as well as a director of the Mountain Valley Bank. He caught the travel bug early in life while in the Navy. Jim, and his wife Mandi, loved to travel the world. Together they traveled to all seven continents, an accomplishment he was quite proud of. In mid-life, Jim acquired a deep affection for skiing. He and Mandi enjoyed an 18-year association with the Washingtonians, a group from Maine, who have been described as “a collective of wannabe ski bums who traveled the world in search of the perfect mountain”. When they finally “hung up their skis”, they loved to travel on European River Cruises, developing friendships wherever they went. Jim is survived by his wife, the love of his life, Ruby ‘Mandi’ Manderson Wilson; two children, Barbara-Ann Wilson Zizzi and husband John of Charlotte, NC, John Thomas Wilson and wife Bridgette of Elkins; and four grandchildren, Andrew James Zizzi and wife Elizabeth, Emily Kathleen Zizzi, Cameron John Wilson, and Ethan James Wilson. He also is survived by first cousin, Grace Wilson Sundelin of Elkins and Leesburg, VA. The family extends grateful appreciation to Dr. R.E. Piccirillo, Dr. Sam Roberts, and to their many wonderful family, friends, and business associates, near and far. The family will receive friends on Friday, February 1st from 5 to 8 p.m. in the Sanctuary of Davis Memorial Presbyterian Church, 450 Randolph Avenue, Elkins, WV. A memorial service to celebrate Jim’s life will be held at Davis Memorial Presbyterian Church on Saturday, February 2 at 1 p.m. with the Rev. Peter Vial officiating. Internment will follow at Maplewood Cemetery. In lieu of flowers, memorials may be made to the Davis Memorial Presbyterian Church for the Capital Gifts Fund or to a charitable organization of your choice. Tomblyn Funeral Home is serving the family. Condolences may be expressed to the family at www.tomblynfuneralhome.com.

Jim Wilson, 83, of Elkins, passed away on January 29, 2019 at his home. He was born November 3, 1935 in Elkins, son of the late Frank Edison Wilson and Esther Barbara Watson Wilson.Jim was a devoted husband, father, and grandfather who was... View Obituary & Service Information

The family of Jim Wilson created this Life Tributes page to make it easy to share your memories.