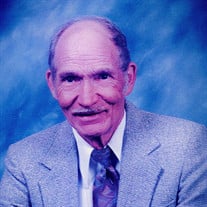 Joe M. “Joe Bob” Carlson, age 90 years, a resident of East Dailey, passed away Thursday, May 20, 2021 at his farm. He was in his usual health and death was unexpected. He was born April 24, 1931 at Adolph, a son of the late Ronald G. “RG” and Emma Kiess Carlson. On August 6, 1952 at Frederick, MD, he was married to Annalee Virginia Bullion who preceded him in death April 18, 2000. He is survived by three daughters, Alexis A. Carlson of East Dailey, Robyn L. Carlson of Keyser, WV and Cyndi Tichnell of Oakland, MD; three sisters, Coryless Metheny and Mary Ann Dick both of Elkins, Cydell Palavido of Phoenix, AZ and three grandchildren. Also preceding him in death was one daughter, Christal Dawn Carlson and three brothers, Christopher “Buck”, Clyde Keith, and Allen Kiess Carlson. He was a Veteran of the United States Navy. He was a graduate of West Virginia University School of Pharmacy and had retired after many years working as a pharmacist. Joe was very active, having ran and finished the Marine Corp Marathon ten times and completed under cut off time, the Big Ditch Lake 50-mile race. He was a member of the National Association of Destroyer Veterans, HW Daniels Post 29 American Legion and was a Charter member of the National World War II Museum. He was a member of the Davis Memorial Presbyterian Church and was an avid hunter and gardener having canned everything he grew. Friends may call from 5:00 pm until 7:00 pm Monday, May 24, 2021 at the Tomblyn Funeral Home in Elkins. Masks and social distancing will be required for all attending the service. A private funeral service will be held with Rev. Dr. Peter A. Vial officiating and internment will follow in the Brick Church Cemetery at Huttonsville. The family suggests that memorial contributions may be made to the Davis Memorial Presbyterian Church, 450 Randolph Avenue, Elkins, WV 26241, or www.dmpc.org online giving in memory of Mr. Carlson. The Tomblyn Funeral Home of Elkins is in charge of the arrangements for Joe M. “Joe Bob” Carlson. Condolences may be expressed to the family at www.tomblynfuneralhome.com.

The family of Joe M. "Joe Bob" Carlson created this Life Tributes page to make it easy to share your memories.