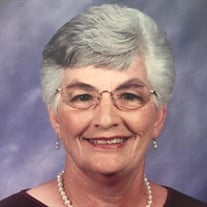 JoEtta Lee (Haddix) Welch, age 87, a resident of East Dailey, passed away on Saturday, July 24, 2021. She had been in declining health. She was born on May 14, 1934, at Becky’s Creek, near Huttonsville, WV, a daughter of the late Ross and Gladys (Wood) Haddix. On April 17, 1954, in Oakland, MD, she married Roy Junior Welch, who preceded her in death on March 16, 2016. JoEtta is survived by two daughters, Joni and Joyce, one son, Brad, and one grandson, Eric. She was preceded in death by a daughter, Kim, and a grandson, Jared. Also preceding her in death were three brothers: Carroll, Donald, and Ross “Sonny” Haddix; and three sisters: Ardell Thompson, Elaine Nelson, and Arlene Smith. JoEtta attended the schools of Randolph County. She was a member of the Tygart Valley Baptist Church at Beverly. Prior to her marriage, she was employed as a switchboard operator for C&P Telephone Company and also worked as a clerk at G. C. Murphy Company. She was a homemaker and a mother for her entire married life. She valued and loved her family and her friendships. Her home was always open to all. A graveside service will be held at 3:00 P.M. on Thursday, July 29, 2021 at Mt Vernon Cemetery near Beverly. Pastor Jack Howell will officiate and internment will follow. The Tomblyn Funeral Home of Elkins is in charge of the arrangements for JoEtta Lee Welch. Condolences may be expressed to the family at www.tomblynfuneralhome.com.

The family of JoEtta Lee Welch created this Life Tributes page to make it easy to share your memories.