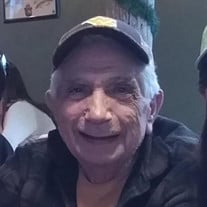 Joseph Andrew Nucilli, 78, of Elkins passed away Friday, October 20, 2017 surrounded by his loving family. He was born February 21, 1939 in Elkins, WV, a son of the late Dominic and Cecelia Nucilli. On June 17, 1958 he was united in marriage to Cora Lea Corley who survives. They celebrated 59 years of love, family and marriage. He is survived by one brother, Carl Nucilli, of Homestead, FL and one sister-in-law, Mary Nucilli of Elkins. Joe is survived by five daughters and one son. Annette Nucilli and fiancé Ron Gadd, Brenda Hornick and husband Tim, Lisa Wamsley and husband Todd, Cindy Negray and husband John, Joseph Nucilli, Jr. and wife Robin, Jennifer Shreve and husband Bill. He is also survived by five grandsons and four granddaughters: Melissa Chewning; Michelle Chewning; Seth Hornick (wife Katie); Matthew Wamsley (wife Tasha); Jessica Severino (husband Anthony) Andrew Wamsley (wife Sarah); Brett Shreve; Christina Negray; and Tyler Shreve. He also has six great grandchildren: Brayden; Jayce; Sophia; Harper; Isaiah; and Nico. He also has several special nieces and nephews. In addition to his parent, he was preceded in death by an infant daughter, Rebecca Jo Nucilli, one sister, Anna Gum and one brother, Mike Nucilli. Joe attended St. Brendan Catholic School and graduated in 1958 from Elkins High School where he was captain of the football and basketball teams. He coached Jerry West Basketball and Elkins Little League Baseball where he was a father figure and role model to the youth of Elkins. He influenced and supported everyone who needed him. He was employed for many years at Kelly Foundry, Eagle Snacks and Tygart’s Valley Sanitation. Joe loved his family first and foremost. He enjoyed working in his garden, walking and dancing. What he loved most was being with his family and fishing at the Outer Banks. Joe was a life-long member of St. Brendan’s Catholic Church, where a Mass of Christian Burial will be celebrated at 9:00 AM Monday, October 23, 2017 with Father Chapin as the celebrant. Interment will follow at St. Brendan Cemetery. The family would like to invite friends and family after the burial service for a luncheon at the Fellowship Hall. In lieu of flowers, donations can be made to the American Heart Association, P.O. Box 12110, Charleston, WV 25302 in memory of Joe. The Tomblyn Funeral Home of Elkins is in charge of the arrangements for Joseph Andrew Nucilli, Sr. Condolences may be expressed to the family at www.tomblynfuneralhome.com.

Joseph Andrew Nucilli, 78, of Elkins passed away Friday, October 20, 2017 surrounded by his loving family. He was born February 21, 1939 in Elkins, WV, a son of the late Dominic and Cecelia Nucilli. On June 17, 1958 he was united in marriage... View Obituary & Service Information

The family of Joseph A. Nucilli Sr. created this Life Tributes page to make it easy to share your memories.