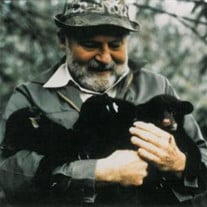 Joseph Carol Rieffenberger, age 89 years, a resident of Elkins, passed away Saturday August 27, 2016 at Colonial Place in Elkins. He was born December 2, 1926 in Austin, MN, a son of the late William John and Frances Genevive [Ulwelling] Rieffenberger. He was married for 43 years to Mary Moore [Adams] Rieffenberger who preceded him in death. Joe was the last surviving member of his immediate family. He is survived by nephews John Rieffenberger and Rick and Joe Strezishar. Two nephews, Jim Rieffenberger and Anthony Strezishar also preceded him in death. Joe was a World War II Veteran having served as a lineman with the U.S. Army 89th Field Artillery in Japan. Joe was especially proud of the recognition he received for an innovative device he created to improve the way his unit laid communications wire. Mr. Rieffenberger was a two time graduate of the University of Illinois receiving his BS degree in 1951 and his MS in 1953. He began his illustrious career as a Wildlife Biologist for the West Virginia Division of Natural Resources (WVDNR) on August 10, 1953 and retired November 30, 1999. Joe conducted research on wood ducks, woodcock, and other species throughout his WVDNR tenure. However, he was best known as “The Bear Man” for his research that restored the population of the black bear, our West Virginia state animal. Some say Joe spent so much time on the bear project that he assumed the bruin’s personality! Joe was also known for his intellect and his unique woodworking skills that ranged from his custom truck consoles and Rube Goldberg-like contraptions to his chainsaw bear sculptures. Joe was an active member of several environmental organizations; among them were The Brooks Bird Club, The Highlands Conservancy, and The Nature Conservancy. Joe supported several philanthropic endeavors including the local Arts Bank. He also sponsored so many third world foster children over the years that he lost count. Mr. Rieffenberger’s request for cremation was honored. A gathering of Friends and Family to celebrate Joe’s life will be held from 1:00 pm until 3:30 pm Saturday, October 8, 2016 at the West Virginia Department of Natural Resources Operations Center, Ward Road, Elkins, WV 26241. The family suggests that memorial contributions be made to either Hospice Care Corporation, P. O. Box 760, Arthurdale, WV 26520 or to the environmental organization of your choice. The Tomblyn Funeral Home of Elkins is in charge of the arrangements for Joseph Carol Rieffenberger. Condolences may be expressed to the family at www.tomblynfuneralhome.com.

The family of Joseph Rieffenberger created this Life Tributes page to make it easy to share your memories.