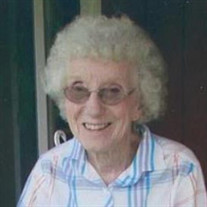 Josephine “Jo” Kayes Vanscoy, age 95 years, a resident of Dailey passed away Wednesday evening, February 26, 2020 at Valentine’s Personal Care Home in Elkins. She was born January 24, 1925 in Campbelltown, WV, the middle child of the late Frank B. and Clara Dunbrack Kayes. At the age of eleven, her family moved to the Tygart Valley Homestead Division in Valley Bend, Randolph County. They were one of the original homesteaders of Tygart Valley Homestead. On August 15, 1947 in Montrose, she was married to C. Glenn Vanscoy who preceded her in death January 26, 2005. She is survived by two sons, David G. Vanscoy and wife Alice of Keyser, WV and Allen Vanscoy and wife Lois of Dailey; and one sister, Naomi Wamsley of Elkins. Also surviving are five grandchildren, Mike Vanscoy and wife Alison of Ambler, PA, AG Vanscoy and wife Michaela of Beverly, Eric Vanscoy and wife Angie of Philippi, Tricia Newlin and husband Roger of Keyser, WV and Greg Vanscoy and partner Jennifer of Keyser, WV. Three great granddaughters, nine step-great grandchildren, and three great-great grandchildren, several nieces and nephews also survive. Also preceding her in death were three brothers and two sisters. Jo attended 7th and 8th at Beverly Grade School and graduated Salutatorian of Beverly High School in 1942. During World War II she was employed as a lumber grader for the Tygart Valley Wood Product of Dailey, WV, being one of the first four females hired. She later worked for the Valley Water Company and in 1961 was employed by the US Postal Service. She worked at the Dailey, Beverly and Valley Bend Post Offices and served her last sixteen years as Postmaster at the Dailey Post Office, retiring in 1998. She became a member of the Valley Bend Methodist Church at the age of sixteen. She was a member of the APWV, National Association of Federal Employees, National Association of Postmasters and AARP. She attended the Valley Bend Presbyterian Church of East Dailey. Jo donated her remains to the Human Gift Registry of the WVU Medical Center in Morgantown, WV. Friends will be received from 4:00 pm until 6:00 pm Monday, March 2, 2020 at the Tomblyn Funeral Home in Elkins. A memorial service will be at 6:00 pm Monday from the funeral home chapel with Pastor Ann Fretwell officiating. In lieu of flowers, the family suggests that memorial contributions be made to the Tygart Valley Homestead Association, P. O. Box 115, Dailey, WV 26259 in memory of Jo. The Tomblyn Funeral Home of Elkins is in charge of the arrangements for Josephine “Jo” Kayes Vanscoy. Condolences may be expressed to the family at www.tomblynfuneralhome.com.

The family of Josephine Jo Vanscoy created this Life Tributes page to make it easy to share your memories.