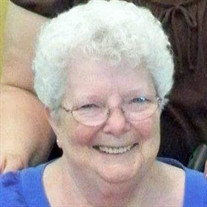 Joy A. Lanham, age 76 years, a resident of Montrose, passed away Sunday evening, October 29, 2017 in the Ruby Memorial Hospital at Morgantown, WV. She was born April 4, 1941 at Elkwater, WV a daughter of the late Aldridge N. and Bertie Mae Harris Channell. On December 6, 2011 at Hendricks, WV, she was married to Cecil H. Lanham who survives. Also surviving is one daughter, Kimberly Porter-Hinchman and husband Matthew of Mabie, a daughter-in-law, Debi Lanham, Grafton, WV, three sons, Ronald Lanham and wife Diane of Montrose, Kevin Lanham and wife Janet of Amelia Court, VA and Christopher Lanham and wife Rachel of Jackson, MI, one brother, Nelson S. Channell and wife Rose of Grosse Point Shores, MI and two sisters, Lenora Takach of Dalton, PA and Ruth Shepard and husband Sam of Wayne, WV. Thirteen grandchildren and two great grandchildren also survive. Also preceding her in death was an infant brother, Arling Channell, one son, Gregory M. Lanham, brothers, John, Fred and Lehaman Channell and sisters, Dorothy Snyder, Mary Ware and Ava Snyder. Joy was a graduate of Morgantown School of Business and retired from Palco Industries of Ohio where she worked as the office business manager. She is a member of the Emmaus Community, NCWV and the Harrison Community Church. She gave the best hugs in the world and made everyone feel loved. Friends may call from 5:00 pm until 8:00 pm Thursday, November 2, 2017 at the Tomblyn Funeral Home in Elkins. A funeral service will be held at 11:00 am Friday, November 3, 2017 from the funeral home chapel with Pastor Sean Barnett and Pastor Christopher Lanham officiating. Interment will follow in the Rowan Memorial Cemetery at Mabie, WV. The family suggests that contributions be made to the Harrison Community Church, C/O Edna Shockey, 239 Ryan Run, Mabie, WV 26278 in memory of Joy. Condolences may be expressed to the family at www.tomblynfuneralhome.com. The Tomblyn Funeral Home of Elkins is in charge of the arrangements for Joy A. Lanham.

Joy A. Lanham, age 76 years, a resident of Montrose, passed away Sunday evening, October 29, 2017 in the Ruby Memorial Hospital at Morgantown, WV. She was born April 4, 1941 at Elkwater, WV a daughter of the late Aldridge N. and Bertie Mae... View Obituary & Service Information

The family of Joy A. Lanham created this Life Tributes page to make it easy to share your memories.

Joy A. Lanham, age 76 years, a resident of Montrose, passed away...