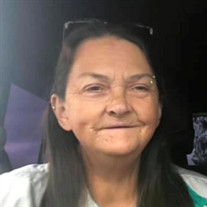 Joyce Joan Raines Healey, age 57 years, a resident of Elkins, passed away Monday, February 15, 2021 in the Emergency Department of the Davis Medical Center. She was born March 4, 1963 at Elkins, a daughter of the late James F. “Jim” Floyd and Eunice M. Watson Raines. Surviving are four sons, Christopher Leary and wife Sabrina of Mannington, WV, Jerry Leary and husband Allen Burr of Century, WV, James Leary of Parkersburg, WV, Steven Filler of Louisiana and one daughter, Samantha Healey Vandevender and husband Cody of Montrose. Also surviving are two brothers, Ed Floyd of Elkins and Danny Raines of Mill Creek; one sister, Hazel Raines of Ona, WV; seven grandchildren, Braeden, Chelsea, Skylar, Jason, Tiffany and her two sisters and one great grandchild, Klailea Brooke. In addition to her parents, she was preceded in death by one brother and one sister. Joyce was a homemaker and Pentecostal by faith. A private service will be held and cremation will follow. In lieu of flowers, memorial contributions may be made to the Randolph County Humane Society, P. O. Box 785, Elkins, WV 26241 in memory of Joyce. The Tomblyn Funeral Home of Elkins is in charge of the arrangements for Joyce Joan Raines Healey. Condolences may be expressed to the family at www.tomblynfuneralhome.com.

The family of Joyce J. Healey created this Life Tributes page to make it easy to share your memories.