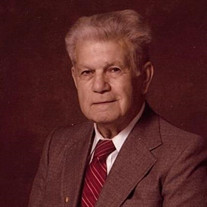 Kenneth Lee Booth, age 89 years, a resident of the Laurel Mountain Road, Elkins, passed away Thursday, December 05, 2019 at his home with his wife and daughter by his side and under the care of WV Caring. He was born Saturday, February 1, 1930, a son of the late Lee and Hazel Moore Booth. He was born in Elkins, but was raised in Barbour County where he attended the two-room Shockey School and attended high school in Belington. He was twice married, first to Wanda Lee Lunsford who preceded him in death August 31, 1983. Second to Veda Mae Boggs-Hamrick who survives, whom he married September 7, 1984. He is survived by one daughter, Norma Mae Hamrick Vandevender and husband Richard of Laurel Mountain Road, two grandchildren, Leanna Mae Vandevender and Brenton Matthew Vandevender and fiancé Tiffany Channel, all of Laurel Mountain Road and a great grandchild due in May of 2020. Also surviving are several nieces and nephews, one special nephew, Bill Wymer, whom he and his first wife raised. Kenneth was a Veteran of the United States Air Force, having served from 1950 until 1953. He worked for the Bernard and Whetsel Block Company, Tygart Valley Block Company and J.F. Allen Block Company at Aggregates, retiring in 1995. He was a member of the Otterbein United Methodist Church, where he served as a member of the Trustees Committee and also served as an usher for many years. Kenneth will be greatly missed by all who knew and loved him. The family would like to thank WV Caring for their loving kindness during this difficult time. Friends may call from 6:00 pm until 8:00 pm Sunday, December 8, 2019 at the Tomblyn Funeral Home in Elkins. A funeral service will be held at 1:00 pm Monday, December 9th, from the funeral home chapel with Pastor Julie Davis officiating. Interment will follow in the Elkins Memorial Gardens, Country Club Road, Elkins. In lieu of flowers, memorial contributions may be made to the Otterbein United Methodist Church, 1100 South Davis Avenue, Elkins, WV 26241 in memory of Kenneth. The Tomblyn Funeral Home of Elkins is in charge of the arrangements for Kenneth Lee Booth. Condolences may be expressed to the family at www.tomblynfuneralhome.com.

Kenneth Lee Booth, age 89 years, a resident of the Laurel Mountain Road, Elkins, passed away Thursday, December 05, 2019 at his home with his wife and daughter by his side and under the care of WV Caring. He was born Saturday, February 1, 1930,... View Obituary & Service Information

The family of Kenneth Lee Booth created this Life Tributes page to make it easy to share your memories.