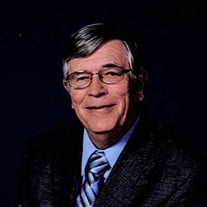 Larry Shelton Barger, age 81 years, a resident of Elkins, passed away suddenly Monday evening, May 2, 2022 in the Davis Medical Center in Elkins. He was born September 8, 1940 at Richwood, WV, the son of the late James Dyer “Doc” Barger and Mary K. Handschumacher Barger-Ayers who survives in Morgantown. On January 30, 1965 at Oakland, MD, he was married to Beth Ann Bennett who survives. Also surviving are three sons, Larry “Shelton” Barger, Jr., and wife Kenna of Beverly, Jeffrey Scott Barger of Elkins, John Dyer Barger and wife Kate of Elkins; and one daughter, Amy Lynn Kuhn and husband Larry of Daybrook, WV. One sister, Fran McClure and husband Jerry of Fairmont and sister-in-law, Donna Barger of Morgantown, WV. Seven grandchildren, Lukas Barger, Linkoln Barger, Legacy Skout Barger Short and husband Trey, Ava Barger and Dyer Barger; Ceressa Kuhn Patterson and husband Dan and Jameson Kuhn and two great grandchildren, Caitlynn and Brock Patterson also survive. In addition to his father, he was preceded in death by one brother, Donald Edward “Don” Barger. Larry was a graduate of Cowen High School in Cowen, WV (1958) and West Virginia University with a Bachelor of Science Degree in Forestry (1966). He joined the U.S. Forest Service in February of 1967 located in Richwood, WV as a trainee forester, transferring to Petersburg, WV in May 1968 as an assistant ranger responsible for timber, wildlife, fire, watershed and range management. In 1975, he transferred from the Monongahela National Forest to Ottawa National Forest in Bergland, Michigan where he served as assistant district ranger responsible for all district activities. In May of 1977, he transferred to the Supervisors Office of the Monongahela National Forest in Elkins, as the timber sales and mensuration forester. During his tenure in Elkins, he served as contracting officer for all major timber sales on the forest. He was responsible for the training and certificate of all timber markers on the forest. He was the first forester in WV to receive the Master Estimator certification with the US Forest Service and was the only Master Estimator in West Virginia, a classification he held until his retirement. Upon his retirement in 1994, he was the timber program leader for the forest and then started Barger Forestry Services, a forestry consulting firm specializing in the sale of timber which he owned and operated until 2021. He was a member of the West Virginia Forestry Association, the Randolph County Foresters Association and received the 2018 Golden Membership Award in the Society of American Foresters. During his forestry career, he was also certified as a Wildland Fire Fighter from 1972 thru 1977 and certified WV Forester. In 2021, he was inducted in the West Virginia Agriculture and Forestry Hall of Fame. Larry felt he never worked a day in his life because he loved his profession. Larry was a member of Otterbein United Methodist Church since 1979 and had served in many positions over the years, including administrative board and served as financial secretary, a position he held since 1990. He was also a church representative to the United Methodist Foundation. He was a member and Past Worshipful Master of Elkins Lodge No. 108, AF & AM, a member of Elkins Chapter No. 35, Royal Arch Mason and Elks Lodge BPOE #1135. Larry was an avid Mountaineer fan and enjoyed hunting and fishing. His greatest love was spending time with his grandchildren. Friends may call from 6:00 pm until 8:00 pm Friday, May 6, 2022 at the Tomblyn Funeral Home in Elkins. A funeral service will be held at 11:00 am Saturday, May 7th, from the funeral home chapel with Pastor Julie Davis officiating. A graveside service will be held at 2:30 pm Saturday, May 7th, at the Handschumacher Cemetery in Upper Glade, WV where Masonic Rites will be accorded at the gravesite by members of Elkins Lodge No. 108, AF & AM. Interment will follow. Memorial contributions may be made to the Otterbein United Methodist Church, 1100 South Davis Avenue, Elkins, WV 26241 in memory of Larry. The Tomblyn Funeral Home of Elkins is in charge of the arrangements for Larry Shelton Barger. Condolences may be expressed to the family at www.tomblynfuneralhome.com.

The family of Larry Shelton Barger created this Life Tributes page to make it easy to share your memories.