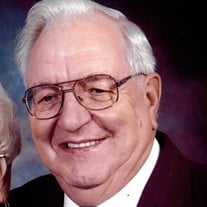 Lawrence H. Betler, age 84 years, a former resident of Valley Bend and a resident of Kingwood, WV, passed away Tuesday, September 12, 2017 in Kingwood. He was born September 3, 1933 at Helvetia, a son of the late Arnold and Ella Karlen Betler. He was married to Don Gloria Miles Betler who survives in Kingwood. Also surviving is one son, Stanford Betler and wife Brenda of Kingwood; two daughters, Sandy Ketterman and husband Frank “Preach” Ketterman of Bowden and Kimberly Betler Lambert McLaughlin and husband Greg of Hickory, NC. Two brothers, Vernon Betler of Parsons, WV and Jim Betler of Breman, OH; one sister, Dorothy Shaw of Buckhannon; five grandchildren, Calen, Jay and Clint Ketterman and Ashley Wyatt and Stephanie Ours; sixteen great grandchildren and several nieces and nephews also survive. Also preceding him in death were two brothers, Glen and Delbert Betler and a sister, Thelma Oesch. Lawrence was a graduate of Pickens High School in 1952, West Virginia University in 1961 and served in the United States Army in Alaska. He was employed by the Farmers Home Administration retiring as District Director in 1990. He was a member of the Tygart Valley Presbyterian Church. He was a Life Member of the Tygart Valley Lions Club serving as President, Secretary and Treasurer. He was a member of the Board of Directors of Elkins Regional Convalescent Center for ten years, a member of the Randolph County Recreational Board, was a past member and Project Leader of the 4-H and 4-H All Stars, Past President of the Izaak Walton League and a member of the Pickens American Legion Post 122. Friends may call from 6:00 pm until 8:00 pm Friday, September 15, 2017 and 10:00 am until 11:00 am Saturday, September 16th at the Tomblyn Funeral Home in Elkins. A funeral service will be at 11:00 am Saturday, September 16th from the funeral home chapel with Pastor Bobbie Rogers and John Wyatt officiating. Interment will follow in the Pickens Cemetery where full military honors will be accorded at the gravesite by members of the West Virginia National Guard Honor Guard Program, H.W. Daniels Post 29 American Legion, Pickens American Legion Post 122 and Tygart Valley Post 3647 Veterans of Foreign Wars. Memorial contributions may be made to the Tygart Valley Lions Club, c/o Harry Elliott, PO Box 123, Beverly, WV 26253 or The Mill Chapel United Brethren in Christ Church, 6732 Kingwood Pike, Reedsville, WV 26547 in memory of Lawrence. The Tomblyn Funeral Home of Elkins is in charge of the arrangements for Lawrence H. Betler. Condolences may be expressed to the family at www.tomblynfuneralhome.com.

Lawrence H. Betler, age 84 years, a former resident of Valley Bend and a resident of Kingwood, WV, passed away Tuesday, September 12, 2017 in Kingwood. He was born September 3, 1933 at Helvetia, a son of the late Arnold and Ella Karlen Betler.... View Obituary & Service Information

The family of Lawrence H. Betler created this Life Tributes page to make it easy to share your memories.