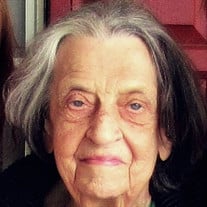 Leona Grace Vance Thompson, age 95 years, a resident of Elkins, passed from this life on Wednesday, March 20, 2019, at Colonial Place Assisted Living Facility in Elkins. Leona was born June 26, 1923 in Horton, WV, a daughter to the late Alston and Anna Vance and sister to the late Bruce Vance. Leona‘s family moved to Parsons in Tucker County when she was young and spent most of her youth growing up there with her little brother Bruce. Leona graduated from Parsons High School in 1941. Sometime after WWII was fully under way, Leona went off to Washington DC to get some training and to do clerical work for the government. While she was there, she was detached to, and did contract work for the Army Air Corp. In June 1953, after returning to Parsons, Leona married Emery “June” Thompson, Jr. of Glady, WV, who preceded her in death August 22, 1999. Leona worked in Parsons for the Agricultural Stabilization Conservation Service (ASCS) for over 40 years. She and her husband June moved to Elkins on Wilson Street shortly after her mother passed in the fall of 1985. Leona was a member of the Women’s Business Association, the Red Hat Society, and the Parsons Chapter No. 91 Order of the Eastern Star and the First United Methodist Church of Parsons for 30 years. Leona is survived by her cousin Martha Blosser of Kerens, her nephews: Dave Vance of Colorado Springs, CO and Steve Vance of Gun Barrel City, TX, her niece: Jo Van Almen of Okeechobee, FL, one grand-niece, four great grand-nieces, two grand-nephews and three great grand-nephews. Friends may call from 6:00 PM until 8:00 PM Thursday, March 28, 2019 at the Tomblyn Funeral Home in Elkins. On Friday, March 29th, friends may call from 10:00 AM until 11:00 AM the funeral hour. Rev. Dr. Basil A. Hensley will officiate. Private interment will be held at the Parsons City Cemetery. The family requests that in lieu of flowers, memorial contributions may be made to the Leading Creek Volunteer Fire Department, P. O. Box 158, Kerens, WV, 26276 or Mountain Hospice, 1002 South Crim Ave, Belington, WV 26250 in memory of Leona. The Tomblyn Funeral Home of Elkins is in charge of the arrangements for Leona Grace Thompson. Condolences may be expressed to the family at www.tomblynfuneralhome.com.

The family of Leona Thompson created this Life Tributes page to make it easy to share your memories.