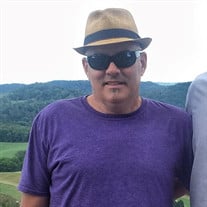 Leonard W. Griffith, age 52 years, a resident of Valley Bend, passed away Tuesday, February 6, 2018. He was born April 1, 1965 at Baltimore, MD a son of the late William L. Griffith, Sr. and the late Shirley Anne Daff Griffith. On August 27, 1988 at Dailey, he was married to Phyllis Joanne Dulaney Griffith who survives at Valley Bend. Also surviving are two sons, Troy E. and Brett W. Griffith, both of Valley Bend and a special son, Andrew John Torres of Jacksonville, NC; a daughter, LeaAnne Dulane Griffith of Valley Bend. Two brothers, William L. Griffith, Jr. of Sebring, FL and Edward M. Griffith and Jennifer of Buckhannon, WV; two sisters, Brenda A. Osborn and husband Bill and Rhonda L. Tharp all of Wyandotte, MI and his Godchildren, Acadia, Zydrunas, Natanas and Aricelli Gaver and Evan and Jillian Morgan also survive. Leonard was a 1984 graduate of Pickens High School and was employed at Arch Coal Company in mine maintenance at the time of his death. He was a member of the BBS Steering Team of Arch Coal, one of the founders of Cheat Mountain Basketball League and a member of the Pickens Presbyterian Church. Leonard’s gifts to the world were solid love and friendship, you could count on. In basketball, he was as likely to assist as he was to score. And for his family, he made everyone feel the favorite. Anyone who was lucky enough to know him had a friend forever. Friends may call from 5:00 pm until 8:00 pm Sunday, February 11, 2018 at the Tomblyn Funeral Home in Elkins. A funeral service will be held at 11:00 am Monday, February 12th from the funeral home chapel with Rev. James Morley officiating. Interment will follow in the Pickens Cemetery. The family request that contributions be made to a charity of choice in memory of Leonard. The Tomblyn Funeral Home of Elkins is in charge of the arrangements for Leonard William Griffith. Condolences may be expressed to the family at www.tomblynfuneralhome.com.

The family of Leonard W. Griffith created this Life Tributes page to make it easy to share your memories.