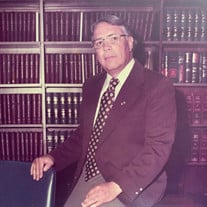 Linney Lee Connolly, Jr., age 99 years, a resident of Elkins, passed away Saturday, August 1, 2020 at his home under the care of Mountain Hospice. He was born April 29, 1921 at Roanoke, VA a son of the late Linney Lee Connolly and the late Willie Scott Connolly. On August 30, 1947 in Roanoke, VA he was married to Marcia Kemp Isbell Connolly who preceded him in death October 10, 2012. Surviving are two daughters, Joan C. Traynelis, Chicago, IL and Karen A. Connolly of Elkins. One sister, Ann C. Keffer of Roanoke, VA; three grandchildren, Vincent Lee Traynelis, Hermosa Beach, CA, Laura Walker and husband Ulises of Chicago, IL and Matthew Connolly Traynelis and wife Kelly of Chicago, IL and three great grandchildren also survive including Cassius, age 5, Camille, age 2 and Dante, age 11 months. Lee graduated from Jefferson High School in Roanoke, Virginia in 1941 and went to work for Norfolk & Western Railroad. He enlisted in the United States Navy in 1942 and served in World War II in the South Pacific at Guadalcanal until 1945. He graduated from the University of North Carolina, Chapel Hill in 1947 having been a part of the R.O.T.C. (Reserve Officers' Training Corps). At that time, he went to work as an accountant for the American Tobacco Company in Reidsville, North Carolina. In 1952, Lee entered the Federal Bureau of Investigation as a special agent. Following training in Washington, D.C. and Quantico, Virginia, Lee was assigned to the Cincinnati, Ohio division. Then he transferred to Chillicothe, Ohio; Charleston, West Virginia; then, finally, Elkins, West Virginia. His territory covered nine counties in the state. Lee retired from the FBI in 1977 and then was employed as an examiner for the Judicial Investigation Commission for the Supreme Court of Appeals of West Virginia. He was a member of First United Methodist Church, Fraternal Order of Police, Elkins Lodge No. 108 AF & AM and a member of the Almost Heaven Chapter of the Society of Former Special Agents of the FBI. Over the years, Lee was a dedicated handball player. He enjoyed social bridge, dancing with the Elkins Terpsichorean dance group and attending jazz festivals around the country. He was an avid baseball fan and collector of vintage LPs/vinyl records. All who knew him appreciated his quick wit and sense of humor. He was married to his loving wife, Marcia, for 65 years. A graveside service will be held at 2:00 pm Thursday, August 6, 2020 at the Maplewood Cemetery in Elkins. Rev. Dr. Basil A. Hensley will officiate. Elkins Lodge No. 108 AF & AM will conduct Masonic funeral rites at the gravesite. The playing of taps and interment will follow. Memorial contributions may be made to the First United Methodist Church, 315 Kerens Ave., Elkins, WV 26241 in memory of Mr. Connolly. The Tomblyn Funeral Home of Elkins is in charge of the arrangements for Linney Lee Connolly, Jr. Condolences may be expressed to the family at www.tomblynfuneralhome.com.

Linney Lee Connolly, Jr., age 99 years, a resident of Elkins, passed away Saturday, August 1, 2020 at his home under the care of Mountain Hospice. He was born April 29, 1921 at Roanoke, VA a son of the late Linney Lee Connolly and the late... View Obituary & Service Information

The family of Linney Lee Connolly Jr. created this Life Tributes page to make it easy to share your memories.