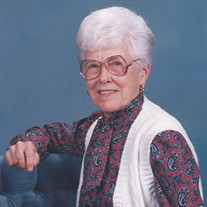 Mrs. Lorena M. “Rena” Sinsel, age 99 years, a resident of Elkins and recently made her home with her daughter, Sandra Varchetto in Morgantown, passed away Saturday, July 17, 2021 at her daughter’s home. She was born May 31, 1922 at Belington, WV, a daughter of the late James E. George, Sr., and Maggie Fitzwater George. On April 9, 1942 at Philippi, she was married to Samuel Willard Sinsel who preceded her in death May 2, 1993. She is survived by one daughter, Sandra K. Varchetto and husband Guy of Morgantown, WV; one granddaughter, JoEllen Varchetto McGraw; one great granddaughter, Abigail M. McGraw and one sister-in-law, Mary Jean George. Also preceding her in death was one granddaughter, Deborah Lynn Varchetto; four brothers, Robert “Billy” George, Charles “Bus” George, Joseph “Buck” George and James George, Jr and three sisters, Betty Everson, Juanita June Kyle and infant sister, Mary Ann George. Mrs. Sinsel was a graduate of Belington High School with the Class of 1940. She was a homemaker and a member of the First Baptist Church of Elkins where she helped to serve dinners at the church for funerals for many years. Friends may call from 1:00 pm until 2:45 pm Wednesday, July 21, 2021 at the Tomblyn Funeral Home in Elkins. A graveside service will be held at 3:00 pm Wednesday at Maplewood Cemetery with Rev. Brett Rinehart officiating. Interment will follow. In lieu of flowers, the family suggests donations be made to the Randolph County Humane Society, P. O. Box 785, Elkins, WV 26241 in memory of Mrs. Sinsel. The Tomblyn Funeral Home of Elkins is in charge of the arrangements for Mrs. Lorena M. “Rena” Sinsel. Condolences may be expressed to the family at www.tomblynfuneralhome.com.

The family of Lorena M. "Rena" Sinsel created this Life Tributes page to make it easy to share your memories.