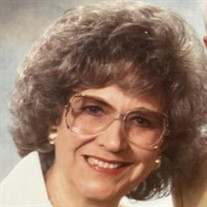 Louise A. Wuchner Helmick, devoted wife, mother, and grandmother departed this life on Monday, December 14, 2020. She was born May 24, 1932, in Pickens, West Virginia to the late Mary Sneberger Waggoner Varner and Louis J. Wuchner. On November 28, 1954, she married Glelma “Shorty” Helmick in Buckhannon, West Virginia. By her husband’s side, as a wife of an Army Career Officer for 32 years, she traveled the globe, met and touched many people’s lives, learned to cook German cuisine food, and gave birth to their son, Michael R. Helmick, who resides in Morgantown, West Virginia with his wife, Linda Helmick, their son Michael A. Helmick, and their grandchildren Mya and Cody Helmick. Upon Shorty’s last tour of duty, Louise and Shorty enjoyed a second career as realtors with Century 21 Joe Guy Hagan in Louisville, Kentucky, where they again retired after 20 years. While residing in Kentucky, they both attended the St. Margaret Mary Catholic Church, but they kept their strong ties to the Sacred Heart Catholic Church in Pickens, West Virginia. Louise is preceded in death by her parents, her great-great granddaughter, Oakley Dawn Hathaway, as well as many wonderful aunts and uncles. Left to cherish her memory is her husband, Glelma (Shorty) Helmick, son Michael and wife Linda Helmick, grandson Michael A. Helmick, and great grandchildren, Mya and Cody Helmick, two brothers Everett Waggoner and wife Bobbie Waggoner, David Varner and wife Dorothy Varner, and one sister Dorothy Lynch, a brother-in-law Dennis Helmick and wife Hazel Helmick, as well as a host of nieces, nephews, cousins and extended family. Friends may call from 10:00 a.m. until 11:00 a.m. Tuesday, December 22, 2020, at the Sacred Heart Catholic Church in Pickens, West Virginia. The Mass of Christian Burial will be celebrated at 11:00 am Tuesday with Rev. Ed Tetteh as the celebrant. Masks and social distancing will be required for those attending the service. Interment will follow at the Sacred Heart Cemetery in Pickens. In lieu of flowers, memorial contributions may be made to the Sacred Heart Catholic Cemetery c/o Holy Rosary Catholic Church, 35 Franklin Street, Buckhannon, West Virginia 26201. The Tomblyn Funeral Home of Elkins is in charge of the arrangements for Louise A. Wuchner Helmick. Condolences may be expressed to the family at www.tomblynfuneralhome.com

Louise A. Wuchner Helmick, devoted wife, mother, and grandmother departed this life on Monday, December 14, 2020. She was born May 24, 1932, in Pickens, West Virginia to the late Mary Sneberger Waggoner Varner and Louis J. Wuchner. On November... View Obituary & Service Information

The family of Louise Ann Helmick created this Life Tributes page to make it easy to share your memories.