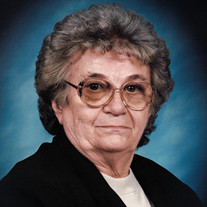 Lucia “Lucy” Petrice, age 90 years, a resident of Coalton, passed away Wednesday, February 12, 2020 at her home. She was born January 9, 1930 at Coalton, a daughter of the late Cesideo J. and Anna Antolini Rossi. On January 27, 1947 at Oakland, MD she was married to William E. Petrice who preceded her in death August 13, 2006. She is survived by two sons, Charles “Tom” Petrice and wife Sandi of Coalton and Vincent Petrice and wife Nicole of Elkins and one daughter, Christina Petrice Tenney of Coalton. Five brothers, Mike Ross of Coalton, Jack Rossi and wife Joy of Charleston, WV, Sal Rossi and wife Iris of Eleanor, WV, James Rossi and wife Pat of Coalton and David Rossi and wife Diana of Eleanor, WV. Three sisters, Julia Stevenson of Elkins, Marguarite Joan Rossi of Orlando, FL, and Mary Porta of Monroeville, PA; two sisters-in-law, Loeta Ross of Elkins and Katherine Wright of Springboro, OH. Also surviving are nine grandchildren and ten great grandchildren. Also preceding her in death was one son, William E. Petrice, Jr.; three grandchildren, Jeremy and Carla Tenney and Briana Petrice; brothers and sisters, Patsy and Bernice Ross, Joe Ross, Tony and Jean Rossi, Vince Ross, Margaret Ann and Jim Zirkle, Joann Ross and Regis Porta. Lucy was a graduate of Coalton High School and the Davis Memorial Hospital School of Practical Nursing. She worked as a nurse at Nella’s Incorporated for forty years prior to her retirement. Lucy was currently serving as President of the Ladies Auxiliary of VFW Post 5583; lifetime member of Tygart Valley Lodge No. 66, IOOF; Delphia Rebekah Lodge No. 62; American Legion Ladies Auxiliary Post 29; St. Patrick’s Church Ladies Guild and was one of the original founders of the St. Patrick Spaghetti Dinner. She served on the Advisory Board and as a volunteer for Catholic Charities. Lucy loved thrift stores, yard sales and red nail polish. Every year she looked forward to the Mountain State Forest Festival, the deer hunter’s dinner she hosted for many years and Coalton Days where she served her famous hot dog chili. Friends may call from 4:00 pm until 7:00 pm Sunday, February 16, 2020 at the Tomblyn Funeral Home in Elkins. A Vigil Service will be recited at 6:30 PM Sunday in the funeral home chapel. On Monday, February 17, 2020 she will be moved to St. Patrick’s Catholic Church at Coalton where the Mass of Christian Burial will be celebrated at 11:00 am. Father James E. O’Connor and Rev. Mr. Raymond Godwin will be the Celebrants and interment will follow in St. Vincent Cemetery at Kingsville. Memorial contributions may be made to St. Patrick’s Catholic Church.PO Box 99, Coalton, WV 26257 in memory of Mrs.Petrice. The Tomblyn Funeral Home of Elkins is in charge of the arrangements for Lucia “Lucy” Petrice. Condolences may be expressed to the family at www.tomblynfuneralhome.com.

The family of Lucy Petrice created this Life Tributes page to make it easy to share your memories.