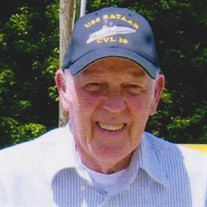 Luther W. “Luke” Cutright, age 83 years, a resident of Elkins, passed away Monday, October 23, 2017 at Colonial Place in Elkins. He was born October 28, 1933 at Elkins, a son of the late Jared and Maude Bowyer Cutright. On June 17, 1961 he was married to Barbara Blackwood Cutright who survives. They had celebrated fifty six years of marriage. Also surviving is one brother, Wren “Buck” and Iris Cutright of Elkins, sister-in-law, Nancy Cutright of Bradford, PA and several nieces and nephews. Also preceding him in death was one brother, Paul G. Cutright and three sisters, Ellen Finnell, Rose Arbogast and Juanita Weese. Luke was a graduate of Elkins High School and a Veteran of the United States Navy having served in the Korean War on the USS Bataan Aircraft Carrier. He had worked several years as a delivery salesman for Sealtest Ice Cream and later was a school bus driver for the Randolph County Board of Education and retired after twenty years of service. He was an avid farmer, who loved the land and raised Black Angus cattle. He had a love for all animals, which he felt were gifts from God and especially his dog Brandi and cat Shadow. He was a member of HW Daniels Post 29 American Legion and the Randolph County and State Retired Service Personnel organizations. He was a protestant by faith. Friends may call from 6:00 pm until 8:00 pm Thursday, October 26, 2017 at the Tomblyn Funeral Home in Elkins. A funeral service will be held at 11:00 am Friday, October 27th from the funeral home chapel with Rev. Dr. Basil A. Hensley. Interment will follow at Mountain State Memorial Gardens where the presentation of the American Flag will be accorded by members of HW Daniels Post 29 American Legion. Memorial contributions may be made to the Alzheimers Association Northern Regional Office, 1299 Pineview Drive, Suite #3, Morgantown, WV 26505 or to the Randolph County Humane Society, P. O. Box 785 Elkins, WV 26241 in memory of Luke. The Tomblyn Funeral Home of Elkins is in charge of the arrangements for Luther W. “Luke” Cutright. Condolences may be expressed to the family at www.tomblynfuneralhome.com.

The family of Luther W. Cutright created this Life Tributes page to make it easy to share your memories.