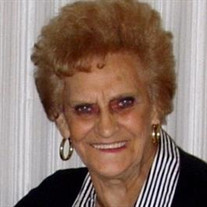 Madaline Honeycutt, 89, of Hyattsville, MD, died Friday, October 5, 2018, following a brief illness. Born January 8, 1929, in Marlinton, WV, she was a daughter of William Ambrose and Edna Lee (Hartley) Sage. In addition to her parents, she was preceded in death by her husband, William Ralph Honeycutt, Jr., in 2000; an infant son, Hubert James Sharp, Jr.; a grandson, Franklin Edward Chandler; four brothers: Russell Sage, Ray Sage, Glenn Sage, and Cecil Sage; and six sisters: Mazie Hannah, Martha "Mattie" Tumblin, Mary Phillips, Dena Foreback, Josephine "Jo" Sharp (her twin), and Shirley Daff. Madaline is survived by her daughter, Karen Jean (Sharp) McDonald, and husband, Ed McDonald, Keyser, WV; three grandchildren: Carl Eugene Chandler, Jr., Jacksonville, FL; Donna Kay Jarboe, Fairmont, WV; and Jackson Wayne Chandler, New York, NY; five great grandchildren: Jordan Dawn Jarboe, Fairmont, WV; Micheal Jerome Jarboe, Jr., Chester, VA; Sophia Renae Chandler, Fairmont, WV; Brennen Michael Chandler, Fairmont, WV; and Jayden Franklin Collins, Fairmont, WV; along with many nieces and nephews. Madaline was a woman of quiet strength and determination. After a divorce in the mid-1960s, she followed in the path of several other family members who migrated from the mountains of West Virginia to the Washington, DC, area in search of employment. There she found a job in the parts department of a Sears store, where she remained for nearly three decades. She also found a husband and settled into a home in nearby Prince George's County, MD, where she lived until the time of her death. For nearly twenty years since the death of her husband, she remained active and independent, and she was loved by many neighbors in an increasingly diverse suburban community. More recently she found a new community of friends as a member of Eastminster Presbyterian Church. Each year she spent the Christmas holidays in the home of her daughter and son-in-law in Keyser, WV. She embraced and generously supported the organizations and causes they cared about, including the National Federation of the Blind and Keyser's community radio station, Mountain Streams Radio. She will be remembered for her kind heart and generous spirit. A public viewing for Madaline Honeycutt will be held Saturday, October 13, 2018 from 11:00 AM until 1:00 PM, at the Tomblyn Funeral Home in Elkins. A funeral service will follow at 1:00 PM Saturday from the funeral home chapel with Pastor Jim McCune officiating. Interment will follow in the Mingo Cemetery, Mingo, WV. Memorial contributions may be made to Eastminster Presbyterian Church, 5601 Randolph Street, Hyattsville, MD 20784, or to National Federation of the Blind of West Virginia, 151 S. Mineral Street, Keyser, WV 26726 in memory of Madaline. The Tomblyn Funeral Home of Elkins is in charge of arrangements for Madaline Honeycutt. Condolences may be expressed to the family at www.tomblynfuneralhome.com.

Madaline Honeycutt, 89, of Hyattsville, MD, died Friday, October 5, 2018, following a brief illness. Born January 8, 1929, in Marlinton, WV, she was a daughter of William Ambrose and Edna Lee (Hartley) Sage. In addition to her parents, she... View Obituary & Service Information

The family of Madaline Honeycutt created this Life Tributes page to make it easy to share your memories.