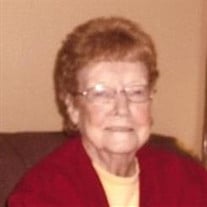 Madelyn W. Bodkin Hedrick, age 90 years, a resident of Elkins, passed away peacefully on Tuesday, March 20th, 2018 in the Emergency Department of the Davis Medical Center. She had been in declining health for several years. She was born July 5, 1927 at Elkins, the first child of Isom and Rosa Bodkin. On March 21, 1947 at Oakland, MD, she was married to Donald D. Hedrick who preceded her in death. They had enjoyed sixty one years together. She is also survived by one daughter and son-in-law, Sonja K. and Donald Corbin of Elkins; three grandsons, Scott Corbin and wife Tanya of Fredericksburg, VA, Stephen Corbin and wife Karen of Ocoee, FL and Chris Corbin and wife Jennifer of Winston-Salem, NC. Four great grandchildren; Paige Nichole and Ethan Scott of Fredericksburg, VA and Quinn Arrington and Avery Ella of Winston-Salem, NC.; one brother, Randall M. Bodkin and wife Carol of Elkins and one special granddaughter, Holly Conklin Elbon and husband Lantz of Clarksville, TN also survive. Also preceding her in death were her sister and brother-in-law, Betty and Bob Harshbarger. Madelyn worked for many years in downtown Elkins as the manager of the Style Shop and then as assistant manager of The Clothes Horse. She later owned a ceramic shop in her home and taught classes for many years. In 1990, Madelyn and Don moved to Deland, FL where they spent fifteen happy years. She was a former member of the Elkins Jaycettes and the Davis Memorial Hospital Auxiliary. She was a protestant by faith and had attended the Israel United Methodist Church, the Highland Park United Methodist Church and the Davis Memorial Presbyterian Church. Mrs. Hedrick’s request for cremation will be honored and the interment of the cremains will be held at a later date. Memorial contributions may be made to the Randolph County Humane Society, P. O. Box 785, Elkins WV 26241 or to the Davis Memorial Presbyterian Church After-School Program, 450 Randolph Avenue, Elkins, WV 26241 in memory of Madelyn. The Tomblyn Funeral Home of Elkins is in charge of the arrangements for Madelyn W. Bodkin Hedrick. Condolences may be expressed to the family at www.tomblynfuneralhome.com.

Madelyn W. Bodkin Hedrick, age 90 years, a resident of Elkins, passed away peacefully on Tuesday, March 20th, 2018 in the Emergency Department of the Davis Medical Center. She had been in declining health for several years. She was born July... View Obituary & Service Information

The family of Madelyn W. Hedrick created this Life Tributes page to make it easy to share your memories.