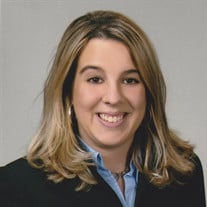 Maria Ann Nestor Glaspell, age 35 years, a former resident of Elkins and a resident of Harrisville, WV, passed away Thursday, September 21, 2017. She was born February 25, 1982 at Elkins, the daughter of Doyletta A.“DeeDee” Nestor of Elkins and Stephen T. Nestor also of Elkins. On October 16, 2014 at Harrisville, WV, she was married to Greg Glaspell who survives. Also surviving is her Paternal Grandmother, Rita Nestor of Elkins, two aunts, Cathy Jones and husband Robert of St. George, and Anita Lockett and husband Jerry of Elkins and one uncle David Nestor and wife Julie of Elkins. A great aunt and uncle, Gloria and Gary Killean of Akron, OH and several other great aunts, uncle and cousins also survive. Also preceding her in death were her Maternal Grandparents, Doyle and Wilma Delauder, Paternal Grandfather, Ronald Nestor and one uncle Daniel Delauder. Maria graduated from Elkins High School and West Virginia University where she received a Bachelor of Science Degree in Political Science with a minor in Business and a Juris Doctorate from West Virginia University College of Law. Maria was an avid reader, loved the beach and was a defender and protector of those she loved. She attended the First Christian Church.. Friends may call from 6:00 pm until 8:00 pm Tuesday, September 26, 2017 at the Tomblyn Funeral Home of Elkins. A funeral service will be held at 11:00 am Wednesday, September 27, 2017 from the funeral home chapel with Pastor Terry Cannon officiating. Interment will follow in the Mount Vernon Cemetery at Philippi, WV. Memorial contributions may be made to the Charity of Choice in memory of Maria. The Tomblyn Funeral Home of Elkins is in charge of the arrangements for Maria Ann Nestor Glaspell. Condolences may be expressed to the family at www.tomblynfuneralhome.com.

The family of Maria Ann Nestor Glaspell created this Life Tributes page to make it easy to share your memories.