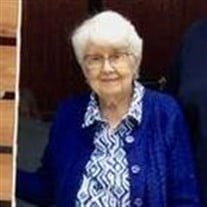 In loving memory of Mary Vaden Booth July 1, 1933 - September 29, 2019 Mary Booth passed away peacefully on September 29, 2019 in her home in Timonium, Maryland. It is with great sadness that the family of Mary say farewell to their loving mother and grandmother. She will be sadly missed by all, but we know that she is now in a better place with her beloved husband. Mary was born July 1, 1933 in Providence, Kentucky. As a teenager she moved to Detroit, Michigan. On August 6, 1955 she married Harry “Vernon” Booth. They made their home in Detroit and then Livonia, Michigan where they remained until 1990 when they retired to West Virginia. Mary and Vernon had two children – Carolyn Irene and Stephen Vernon – five grandchildren, Rachel Vaden, Nicole Rose, Bridget Kay, Lauren Kathryn, and Andrew Holt and two great-grandchildren, Kathryn Puller and Blaine Anthony. She is survived by all in addition to her son-in-law Steven Allison and daughter-in-law Susan Booth. Mary was a homemaker and she and Vernon were also active members of the Primitive Baptist Church both in Dearborn, Michigan and in later years Clarksburg, West Virginia. They were well known for their support of both churches. She had a keen interest in gardening, particularly flowers and vegetables. In later years she took up oil painting. She particularly liked to paint landscapes, and many of these adorn the walls of family and friends. After the loss of her husband Vernon, Mary moved to Baltimore, Maryland where she lived with her son initially and then Mercy Ridge Retirement Village. She made many friends at Mercy Ridge and was very active in community life at the village. In addition to her loving husband Harry Vernon, preceding her in death are her mother and father, Mitchell and Irene Jennings, and her brother Kenneth Jennings. She will be greatly missed by family and friends, but all who knew her feel blessed by her presence and love – we know that she is now in peace with her Lord Jesus Christ. A celebration of Mary’s life will be held at the Chapel at Mercy Ridge Retirement Village on Thursday, October 3 at 12:30 pm. Mary will be laid to rest in Pickens Cemetery, Pickens, West Virginia. A graveside service will be held on Saturday, October 5, 2019 at 11am. In lieu of flowers, the family request donations be given to Ten Mile Primitive Baptist Church, Marshville Road, Clarksburg, WV 26301 or Pickens Cemetery Fund, Pickens, WV 26230. The Tomblyn Funeral Home of Elkins is in charge of the arrangements for Mary Booth. Condolences may be expressed to the family at www.tomblynfuneralhome.com.

The family of Mary Vaden Booth created this Life Tributes page to make it easy to share your memories.