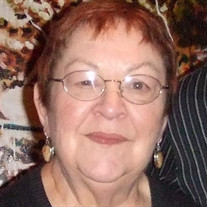 Mary Ann Graham Nichols, age 76 years, a former resident of Randolph County and a resident of Avilton, MD, passed away April 26, 2017 in the Genesis Salem Center in Salem, WV. She was born October 7, 1940 in Charleston, WV a daughter of the late Quentin R. Graham and the late Pauline Rogers Graham. On April 22, 1961 in Oakland, MD she was married to Larry William Nichols who preceded her in death November 5, 2008. She was also preceded in death by one sister, Kay Francis Graham. Surviving is one son, Mark Damon Nichols and wife Jennifer, Avilton, MD; a daughter, Judith Kaye “Jody” Mohr, Salem, WV; one brother, Quentin R. Graham, Mobile, AL and two grandchildren, Emily Katherine Mohr and Mya LuAnn Nichols. Mrs. Nichols was a graduate of Glenville State College in 1961 with a B.A. in Art/English. She was a graduate of Bank Street College of Education and the Parson School of Design in 1985 with a MS in Education/ Supervision and Administration. She was an education instructor with the West Virginia School System between 1962 and 1998. Mary Ann was most notably an art teacher with both the Elkins Junior High and Elkins High Schools. She was Past President of the Randolph County Education Association and former Coordinator and avid supporter of the ArtsBank, Inc. of Randolph County. She was also a former instructor and volunteer with the Augusta Heritage Workshop. Following her retirement, Mary Ann continued to support art and art education through the Randolph County Community Arts Center, the Garrett County Arts Council and the Allegheny County Arts Council. She was an avid supporter of environmental conservation through the Sierra Club and the W.V. Highlands Conservancy. She maintained a love of books and was an avid reader. Mary Ann contributed immeasurably to the lives of countless students. She will be most profoundly missed by her children, daughter in law and granddaughters as well as her many friends. At the request of Mrs. Nichols, cremation has taken place. A Celebration of Mary Ann’s Life will be held from 4:00 pm until 7:00 pm Saturday, May 13, 2017 at the Randolph County Community Arts Center, 2 Park St., Elkins, WV 26241. Memorial contributions may be made to the Randolph County Community Arts Center, 2 Park Street, Elkins, WV 26241 or ArtsBank, Inc., PO Box 1933, Elkins, WV 26241 in memory of Mrs. Nichols. The Tomblyn Funeral Home of Elkins is in charge of the arrangements for Mary Ann Graham Nichols. Condolences may be expressed to the family at www.tomblynfuneralhome.com.

Mary Ann Graham Nichols, age 76 years, a former resident of Randolph County and a resident of Avilton, MD, passed away April 26, 2017 in the Genesis Salem Center in Salem, WV. She was born October 7, 1940 in Charleston, WV a daughter of the... View Obituary & Service Information

The family of Mary Ann Nichols created this Life Tributes page to make it easy to share your memories.