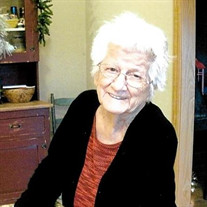 Mary Teresa Sainato Roy, age 97 years, a resident of Harding, passed away Thursday, August 24, 2017 at Colonial Place in Elkins and under the care of Mountain Hospice. She has been in declining health and her death was attributed to Alzheimer’s disease. She was born Saturday, April 3, 1920 at Harding, a daughter of the late Rocco and Rosa Ash Sainato. On December 25, 1938, she married Danny Roy who preceded her in death October 12, 1987. They had celebrated forty eight years of marriage. Surviving are two sons, Danny “Buck” Roy and wife Darlene and David Roy and wife Martha, all of Elkins. Three daughters, Jane Fox and husband Chet of Beckley, WV, Terry Broschart and husband David of Jimtown and Sarah Roy of Elkins. Thirteen grandchildren, twenty five great grandchildren, eight great-great grandchildren, several nieces and nephews and two very special friends, Gloria Payne and Rosalie Antolini also survive. She was the last surviving member of her immediate family having been preceded in death by one daughter, Rose Mary Crouch, her husband Howard, two granddaughters, Leann and Mary Kay; four brothers, Joseph, Carl, Albert and Eugene Sainato and three sisters, Louise Weese, Julia Fansler and Ann Crouch. Mary attended school in Harding and was a member of St. Patrick’ Catholic Church at Coalton. She enjoyed reading, flowers and her garden. What brought her the most pleasure was cooking and baking for her family on Sundays and holidays. She was loved by everyone who knew her. Friends may call from 5:00 pm until 8:00 pm Sunday, August 27, 2017 at the Tomblyn Funeral Home in Elkins. At 7:30 pm Sunday, a Wake Service will be recited by Father Chapin. On Monday, August 28th, Mrs. Roy will be moved to Saint Patrick Catholic Church at Coalton where the Mass of Christian Burial will be celebrated at 11:00 am. Father Chapin will be the celebrant and interment will follow in St. Brendan Cemetery. Memorial contributions may be made to the Alzheimer’s Association Northern Regional Office, 1299 Pineview Drive, Suite # 3, Morgantown, WV 26505 in memory of Mrs. Roy. The Tomblyn Funeral Home of Elkins is in charge of the arrangements for Mary Teresa Sainato Roy. Condolences may be expressed to the family at www.tomblynfuneralhome.com.

Mary Teresa Sainato Roy, age 97 years, a resident of Harding, passed away Thursday, August 24, 2017 at Colonial Place in Elkins and under the care of Mountain Hospice. She has been in declining health and her death was attributed to Alzheimer&#8217;s... View Obituary & Service Information

The family of Mary Teresa Roy created this Life Tributes page to make it easy to share your memories.